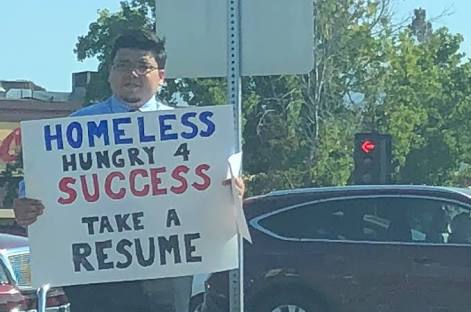 David Casarez has been living out of his car for a year after his dream of running a tech startup went bust, but the Bay Area homeless man may have turned his luck around.

This week, the California man put on a suit and tie and stood at a highway median with a message — please hire me. As the New York Post noted, Casarez held a sign telling passersby that he was homeless and handing out dozens of copies of his job resume.

The strategy earned some viral attention this weekend, with someone sharing a picture of Casarez handing out his job resumes that went viral across social media, earning plenty of interest on Twitter and shooting to the top of the link-sharing site Reddit. Because the woman who stopped to take Casarez’s picture also got some close-up shots of his resume, the viral attention also helped to expand his job search.

Casarez has quite the resume. He has a bachelor’s degree from Texas A&M University in information systems management and worked as a web developer in Austin before deciding to move to the Bay Area to pursue his dream of starting his own tech company. That ultimately didn’t work out and the company failed, and Casarez has been homeless for more than a year. He had been living out of his van for some time, but it was repossessed and he said he now sleeps on a bench in a nearby park.

That could be changing very soon, the New York Post reported. The homeless man said he has gotten hundreds of job offers after his viral job search strategy, including some interest from Google and a number of other local startups.

“A product manager from Bitcoin.com was wondering if I could work remotely of if I want to relocate to Tokyo,” Casarez said.

His story took hold in the Bay Area and across Twitter, where many people shared the hashtag #GetDavidAJob. As KRON-4 reported, many Texas A&M grads also took it upon themselves to help the fellow alum, networking his resume and trying to help him connect with some job openings.

David Casarez said he is shocked at how quickly his story has gone viral, and as he mulls over the job offers and opportunities to move to Tokyo, he will be spending the night back on his bench in the park.