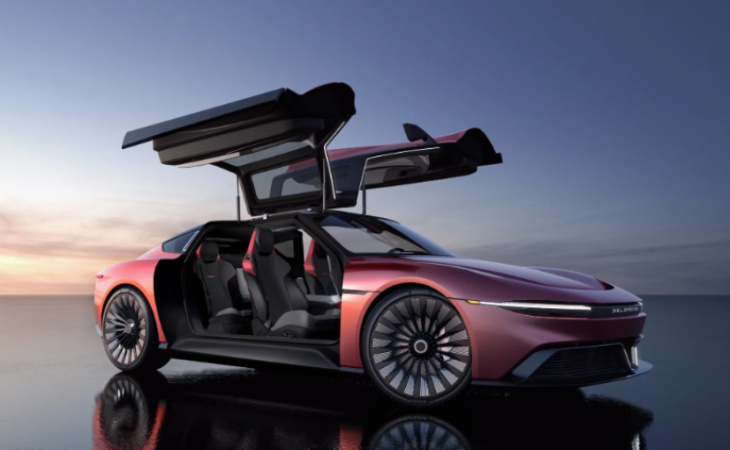 The DeLorean comes with iconic gull-wing doors, staying true to its 80s-era classic appearance in Back to the Future. The first images reveal some other details as well, however full updates are yet to be known. The brand is attempting t resurrect the DeLorean name to transform it into EVs.

The vehicles can reach 60mph in around 2.99 seconds. Alpha 5 isn’t the same one behind all the earlier DeLorean vehicles. This company went defunct in 1982. But in April, a Texas-based company that supplied replacement parts to owners of vintage DeLorean vehicles came right in. It snapped the rights to the DeLorean brand and launches a teaser revealing EV DeLorean in April.

This vehicle is estimated to come with a 100kWh battery and has 300 miles range with a top speed of 155mph. DeLorean says that the specs will belong to the base performance model. However, there are no details on the price and performance of the vehicle. Also, the Alpha 5 is hinted to be at its heritage to its gas-powered predecessor. It comes with a sloped design and gull-winged doors. The smoother curves are traded with an angular look and have four seats rather than the typical two seats.

Despite some obvious differences, DeLorean partnered with Italdesign, the same Volkswagen-owned design team that helped develop the look of the 1981 DMC-12, and its take on the electrified version ushers it into the future.

DeLorean plans on showing off the Alpha 5 to the public on its website tomorrow morning, but you can sign up to get a sneak peek at its images and specs right now. We’ll have to wait a bit longer to see the car in action, though, as DeLorean’s set to reveal the Alpha 5 in Pebble Beach on August 21st. While it is a whole new company, DeLorean has partnered with Italdesign, the design firm that worked on the original DeLorean, to design the Alpha5. The design pays slight homage to the original with its gull-wing doors and louvered rear window, but that’s really about where the similarities end.

These specs are for the “base performance model,” which suggests there will be other models available, with lower, and perhaps even more, performance. DeLorean is targeting the Porsche Taycan as their benchmark vehicle for performance, so you can expect that this will be a capable vehicle. Despite its provenance as the futuristic star vehicle of the Back to the Future series of movies, the original DeLorean had a pretty standard V6 engine. In the movie, the fictional time machine was “electrical” – what better way to make use of 1.21 gigawatts of onboard nuclear power.