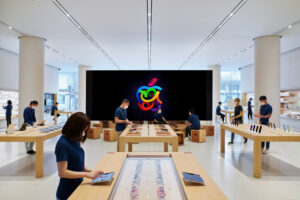 Reports state that Apple stores workers at an outlet in Atlanta, Georgia have reportedly withdrawn their request for a union vote. Surprisingly, this took place just a few days prior to the date it was supposed to take place, citing alleged intimidation from the company.

The retail staff at the Cumberland Mall store location of Apple were set to to vote on Thursday, June 2. The vote was supposed to determine whether or not the staff wanted the union Communications Workers of America (CWA) to represent them. Currently, they are letting go of the bid for unionisation, with the CWA simultaneously accusing the tech giant of preventing the election. According to a report, the union stated how the company’s ‘repeated violations of the National Labor Relations Act’ contributed to making this ‘free and fair election impossible.’

A representative from CWA stated how an ‘overwhelming majority’ of the Cumberland Mall Store staff announced the formation of a union last month, requesting ‘recognition from the company.’ Moreover, they stated how since this point, Apple organised a ‘systematic, sophisticated campaign’ in order to intimidate the workers, interfering with their unionising rights. Additionally, the CWA also specified how the rising Covid-19 cases in the location could impact the vote owing to health concerns of the staff.

“We are not moving forward with the election given what Apple’s response has been and the coercive environment they created,” the Cumberland Mall Organising Committee said in a message to co-workers at the store.

The staff at the Atlanta location became Apple Inc’s first workers to file for a union election this April. Over 70% of the employees, eligible for the unit would sign the union cards. The vote would have emerged as the first unionised Apple store in the US if it were successful. Owing to the sudden withdrawal, entities are visibly accusing Apple of the alleged use of anti-union tactics to prevent unionisations.

Not long, Apple’s senior vice president of retail and people, Deirdre O’Brien visibly expressed concerns regarding unionising to 58,000 Apple employees, according to leaked audio recordings. Reports publishing parts of the recording showed how O’Brien told workers how putting another organisation in between would harm Apple’s relation with its retail staff.

Additionally, stores in Maryland and Kentucky, along with Apple’s flagship location in New York City have started off the process of pursuing unionisation. On the other hand, Apple reportedly increased base pay for their retail staff from $20 to $22 per hour as stores evidently pushed for unionisations. This detail was revealed in a memo studied by some news outlets.