San Francisco-based DocuSign (DOCU) reported third-quarter earnings after the market close on Thursday. Demand for its products surged during the early part of the coronavirus outbreak but many businesses are resuming in-person meetings. 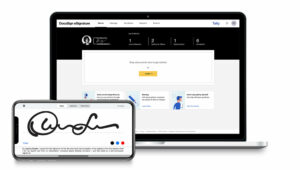 “Third quarter revenue growth of 42% year-over-year and operating margin of 22% exceeded our expectations. After six quarters of accelerated growth, we saw customers return to more normalized buying patterns, resulting in 28% year-over-year billings growth,” said Dan Springer, CEO of DocuSign. “With a $50 billion TAM and 1.11 million customers worldwide, we are confident in the value DocuSign delivers in an increasingly digital anywhere economy.”

Cash, cash equivalents, restricted cash, and investments were $908.2 million at the end of the quarter.

For the final three months of the year, growth is expected to come in at around 30%, which CEO Dan Springer acknowledged as a disappointment after “exceptionally high growth rates at scale” during the first half of 2020.

“While we had expected an eventual step down from the peak levels of growth achieved during the height of the pandemic, the environment shifted more quickly than we anticipated,” Springer said on the earnings call.

Prior to the after-hours plunge, DocuSign’s stock was up about 4% for the year, trailing the S&P 500′s 20% gain. Last year, DocuSign shares tripled in value.