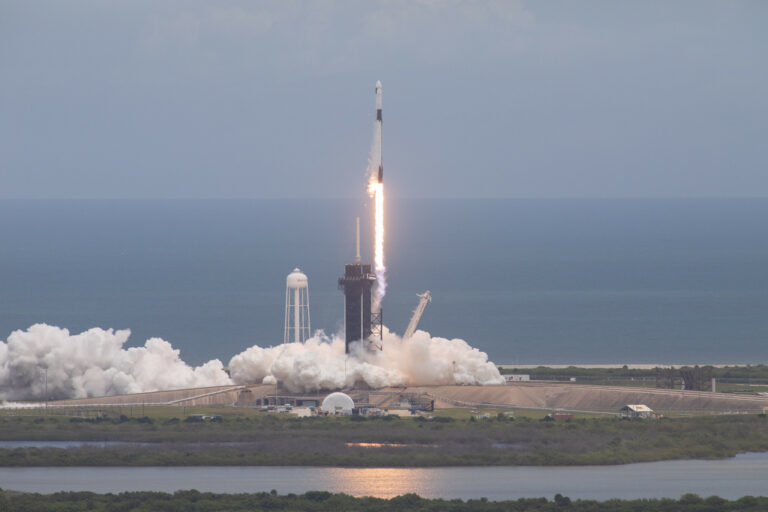 Dragon Cargo Capsule lifted off by Falcon 9 The Falcon 9 headed downrange northeast from Kennedy which is powered by 9 Merlin engines that generated 1.7 million pounds of thrust.

Earlier this week, the launch attempt was canceled due to bad weather, SpaceX sent a Dragon! Not a real dragon but a Dragon cargo capsule toward the ISS (International Space Station) on Saturday where supplies and experiments weigh nearly four tons. It was lifted off from the Kennedy Spaces at around 2:20 p.m. EST on a Falcon 9 rocket.

The company withdrew the first launch attempt for the resupply mission on Tuesday due to rainfall and cloud cover at the Florida spaceport. The rocket Falcon 9 was at the launch pad at Kennedy till the next launch opportunity, and they were able to launch on Saturday.

On Saturday it was launched successfully and on Sunday at 7:30 am, the Harmony module on the International Space Station started docking the cargo Dragon spacecraft. After the docking, Astronauts will be able to open the hatches to begin unpacking cargo inside the pressurized chamber of the Dragon Spacecraft.

As Falcon 9 is popular for returning back to a home of its own. This time as well, the Falcon 9 headed downrange northeast from Kennedy which is powered by 9 Merlin engines that generated 1.7 million pounds of thrust. At the first stage of the rocket, the rocket shut down for around 2 minutes and 30 seconds into the mission. This allowed the booster to come down to landing on a drone ship about 186 miles (300km) downrange in the Atlantic Ocean about seven and a half minutes after takeoff.

The booster of the rocket with tail number B1076 completed its first flight to space on the CRS-26 mission also known as the resupply mission. The Dragon capsule is also newly deployed from the upper stage of Falcon 9 around 12 minutes after the liftoff to begin the journey to the International Space Station.

At the end of the mission, after unpacking is done by the Astronauts, the reusable capsule will get undocked from the station and head for the parachute-assisted splashdown off the shore of Florida in mid-January with huge tons of cargo.

The cargo on board the Dragon capsule contains two new ISS Roll-Out Solar Arrays or iROSA units which will be required to upgrade the space station’s power plan.

Other cargo on the CRS-26 mission includes experiments to test the transition of dwarf tomatoes on the space station, a movable microscope that will enable astronauts to collect medical imagery of their own blood examples, and a technology demonstration to collect data on the building of flexible structures in space.