Drones to Patrol Forests To Monitor Ecological and Environmental Changes

A team of researchers at the Imperial College London’s Aerial Robotics Lab have now developed drones that are capable of attaching sensors to trees and monitor the ecological and environmental changes taking place in the forests.

Drones are used for multiple purposes worldwide. They are used to deliver certain items and are also used for agricultural purposes. A lot of drones are also used for monitoring purposes and help in the enforcement of law. There is a steady increase in the involvement of drones in search and rescue operations to detect people stuck in areas where human search teams can’t reach easily.

Their ability to fly makes them compatible for most such jobs. A lot of times drones are equipped with sensors to facilitate collection of more data. Sensors are also used for monitoring forests and are used to keep a track of changes such as temperature, light and humidity along with the movements of animals and insects in their habitat.

In order to address this problem the researchers at the  Imperial College London’s Aerial Robotics Lab have developed drones that are capable of shooting darts containing sensors on the trees located several miles away even in the cluttered conditions such as in the forests. 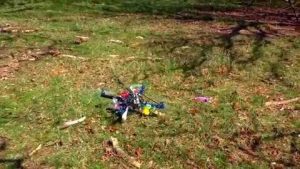 Professor Mirko Kovac who is the lead researcher and the Director of the Aerial Robotics Lab from the Department of Aeronautics at the Imperial College said, “Monitoring forest ecosystems can be difficult, but our drones could deploy whole networks of sensors to boost the amount and precision of environmental and ecological data. I like to think of them as artificial forest inhabitants who will soon watch over the ecosystem and provide the data we need to protect the environment.”

These drones are capable of placing the sensors on trees through contact or even by perching on the branches of trees. Besides being equipped with cameras that help these drones to detect suitable targets they also contain a smart material which changes its shape when heated, to launch the darts and then sticks to the tree. They are also capable of acting as mobile sensors, perching on the branches like birds and collecting the data.

André Farhina from the Department of Aeronautics who is also the co-author of this study said, “There are plenty of challenges to be addressed before the drones can be regularly used in forests, like achieving a careful balance between human input and automated tasks so that they can be used safely while remaining adaptable to unpredictable environments.”

These drones are controlled by people with the help of control units. The researchers are able to see through the camera lens and select the tree to short the dart. For further developments, researchers are aiming to make these drones autonomous. They also hope that these drones will be used in future in order to create a network of sensors to boost data on forest ecosystems.

Dr Salua Hamaza from the Department of Aeronautics who is also a co-author of this study said that, “We aim to introduce new design and control strategies to allow drones to effectively operate in forested environments. Exploiting smart mechanisms and new sensing techniques we can off-load the on-board computation, and create platforms that are energy-efficient and better performing.”