Elon Musk finds mirth in a meme that pokes fun at Jeff Bezos. 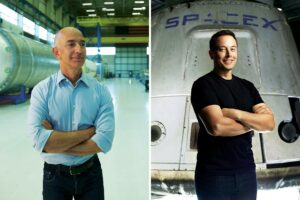 Elon Musk recently found a laugh-worthy meme on Twitter that poked fun at Jeff Bezos about his upcoming flight to space (or edge of space). Seems like the meme really managed to impress the Tesla CEO. Because he commented with a “HaHa.” Now a simple “haha” is not so simple when it is typed out by Elon Musk. Add to that the well-known rivalry between the two companies and we have a topic for discussion.

Seems like the edge of space venture of Bezos proved to be the edge of humor for Musk. Bezos is all set to embark on the space flight on the 20th of July. The commercial space travel domain was already stepped upon by Richard Branson, thus overtaking Bezos in the race to space. And what is more interesting is that the same person laughing at Bezos’ space flight meme was absolutely supportive of Branson.

Edge of Space or Edge of Humor?

It is a known fact that Musk and Bezos are rivals since both of them are competitively running space exploration companies. Thus it is quite natural that a simple meme taking a jibe at fellow rival hit Musk’s laughter nerve quite hard. Looks like the edge of space is not enough for the one who created the meme. And soon enough, Musk joined in laughing. Whether it is an actual case of quality humor or a clear case of sour grapes is another question altogether. Since that question has the capability to kick start another parade of memes, let us keep it aside for the time being.

Bezos will touch the edge of space in the spacecraft “New Shepard” on the 20th of July. The eleven-minute-long flight will fly slightly above the Karman line. Karman line is an imaginary line used as the separating line between the earth’s atmosphere and space. And quite coincidentally, it has proved to be the line of distinction between good humor and rivalry.

Competition is a natural phenomenon in any business. And this is not the first time Musk is taking a jibe at Bezos. Both the billionaires were involved in a war of words not so long ago. Both of them contributed quite energetically to mocking each other’s goals to conquer space. While Musk quite happily compared Blue Origin’s lunar radar “Blue Moon” to “blue balls,” Bezos was equally keen to mock Musk’s aim of colonizing Mars. Also, let’s not forget the time Musk called Blue Origin a “copycat.” And now with the “haha” we have another small detail to add to their sparring history. Seems like the two tech giants are busy battling out for space on Space here on earth. And yes, the word you are looking for is irony again. We never run short of that element when it comes to these folks.