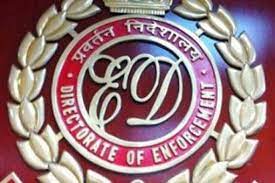 Reports bring out that, the Enforcement Directorate has conducted search operations at various bank and business offices in connection with a case involving cryptocurrency. Reportedly, the agency has registered the case as Money laundering, based on a case registered by Nagaland police. Transactions in cryptocurrency are not allowed in India. The investigation by the economic intelligence agency involved searches at multiple locations, and businesses involving multiple states.

According to reports the search involve an app named HPZ, which reportedly made false claims of providing huge returns for investment in the mining of cryptocurrencies. The procedure adopted by in the fraud to cheat was to first attract customers in the name of giving a huge investment. The fraudster then returned some investment amount and the remaining investment money was illegally sent virtually to place never to return.

The investigating agency has discovered the Chinese link with the HPZ app. During its investigation, the agency also found that the websites registered as gaming and loan were involved in receiving funds. According to reports the, economic intelligence agency found documents hinting at the involvement of such companies. The investigating agency reportedly found these companies maintaining large amounts in their virtual account. A total of 46.67 crores has so far been found. Reports bring out that, ED is suspecting the role of a Gurugram-based Jilian Consultant involvement in frauds.

The Cashfree Payment spokesperson said “We continue to extend our diligent co-operation to the ED operations. We were able to provide the required and necessary information within a few hours on the day of enquiry. The operations and on-boarding processes of Cashfree Payments are fully compliant with existing regulations.”

As per reports another organization Easebuzz, whose role has been suspected in the investigation has said in its statement that, it does not have any association with the merchants named in the investigating agency’s bad book. It clarified that the parties in question were only using its gateway. The organization also said, that, the party in question is a counterparty of the merchant, who has been proactively identified as per an internal report of the company. It also said that they intend to extend their all support to the company.