On August 5, 2021, the Ethereum network had a substantial upgrade, which resulted in catastrophic Ethereum burning. The newest upgrade was around five Ethereum Improvement Proposals, and it’s known as the London Hard Fork (EIPs). These include EIP 1559, which attempted to increase the network’s performance for users while also boosting cryptocurrency mining. 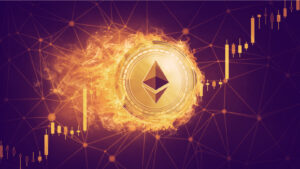 Furthermore, the EIP 1559 upgrade addressed criticism of Ethereum’s growing transaction prices and network congestion by adding a new Ethereum burning technique that made the procedure easier. Since the EIP 1559 upgrade, approximately 300,000 Ethereum coins worth over $1 billion have been destroyed or removed from circulation.

EIP-1559, which was recently introduced to Ethereum, had the purpose of slowing down the rate at which the amount of ETH rose. Surprisingly, the Ethereum collection has remained unchanged in recent days. Instead, it has significantly decreased.

More Ethereum has been burned on the network than was created a few days ago, implying that there is currently less Ethereum available than there was yesterday. This, according to Ethereum experts, is the first time something like this has happened on the network.

In layman’s terms, the EIP-1559 upgrade was a coding change to the Ethereum blockchain that allowed block sizes to be increased, resulting in higher transaction throughput on the network. The Ethereum network has experienced congestion in recent years due to the adoption of non-fungible coins and decentralised financial apps like Uniswap and loan protocol Aave. The requirement of fixed payment for each transaction was another noteworthy component of the concept. Previously, the cost was paid to the miners who validated network transactions; now, the basic fee would be burned, which means it would be sent to an inaccessible wallet.

The idea was to reduce the total amount of ETH in circulation. Causing the price of Ethereum to fall in order to meet demand.

The reasons for implementing a new burning method are as follows:

This novel burning technique has proven to be an effective deflationary strategy, cutting network inflation. Previously, Ethereum miners were paid around 13,000 Ethereum each day. This has been successfully combated by the new technique. Which has resulted in a decrease in daily ETH delivery and an increase in Ethereum burning.

The amount of Ethereum burned this week was quite little; the amount burned in the next two months, six months, or even a year would be unfathomable. According to experts, if Ethereum burning continues at this rate for the following six months, the total number of ETH burned by the end of the year will be 1,783,000.

Following the recent rollout of the network upgrade, Ethereum experienced a surge in demand and price action. Owing to its potential value enhancement with NFT and DeFi spaces. As well as its role as the “first-mover” in the field of blockchain.