Stefan He Qin, a 24-year-old Australian national, will serve 90 months in federal jail for scamming his customers over $90 million. He was also sentenced to forfeit roughly $55 million in embezzled funds by the courts. 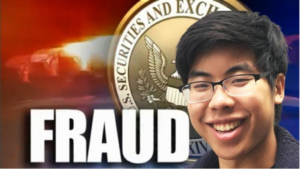 The Path to Jail

Stefan Qin was sentenced to seven and a half years in jail after stealing approximately $90 million from his clients, according to a news release from the US Department of Justice.

The Australian was in charge of two cryptocurrency investment funds – Virgil Sigma and VQR as their headquarters were in New York. Both companies’ operational structure was to collect money from investors, which later to employ in arbitrage trading strategies. What’s more, they promoted themselves as “market-neutral,” meaning that the volatility of the digital market does not expose their clients to any risks.

Per the marketing reports, Virgil Sigma has had only one month where it did not register profits, March 2017. Qin was also in constant relation with his customers. Often bragging about the success of his investment funds. He even reached the Wall Street Journal pages after Virgil Sigma had yielded an annual return of 500% in 2017.

It all sounded too good to be true, and “Qin’s investors soon learned that his plans were little more than a ruse enabling him to pilfer and make illicit investments with client funds”. according to the article.

The 24-year-old spent the money on himself, including services, meals, and the rent of a beautiful penthouse apartment in New York. Qin did not stop there; he invested a large amount of the investors’ money in companies that had nothing to do with cryptocurrencies.

Following the investigation, he was sentenced to seven and a half years in prison. All his investment funds were ordered to discontinue operations by the court. Apart from doing time in prison, Qin would have to repay about $55 million in stolen funds.

More incarceration is on the way.

While the above-mentioned court verdict of more than seven years in federal prison may appear to be a lengthy sentence. It is not the longest sentence ever handed for offences involving digital assets.

According to CryptoPotato, Roger Nils-Jonas Karlsson, a Swedish native, was sentenced to 15 years in prison. The imprisonment was for duping over 3,500 people into a bogus Bitcoin investment scheme.

He utilised the cash exclusively for his personal enrichment. Purchasing a resort in Thailand, beautiful condos, and even a racehorse. Assuring investors that their money (mostly in cryptocurrencies) was in safe hands.

Karlsson’s sentence could have been far heavier had he not pleaded guilty to all charges. In addition, as part of the sentence, the US authorities ordered him to surrender the Thai resort as well as other assets. He was also had to repay all of the money he had stolen from his victims.