Widely considered to be one of the most celebrated and significant sporting figures of the 20th century, Muhammad Ali – born as Cassius Marcellus Clay Jr. – was an American professional boxer, entertainer, philanthropist, and activist. Even 50 years after winning a gold medal at the 1960 Summer Olympics, Ali’s legacy extends beyond the ring, as he continues to be remembered for work as a spoken word artist, actor, and spokesperson for civil rights and the racial integration of African-Americans.

His signature Orthodox boxing style, coupled with his fearlessness and unparalleled work ethic, make him the legend that he recognised as today. Throughout his career, Ali received numerous awards and accolades, including GQ’s “Athlete of the Century,” Sports Illustrated’s “Sportsman of the Century,” a United Nations Messenger of Peace, as well as civilian and international honours, such as the Amnesty International Lifetime Achievement Award and the Presidential Medal of Freedom.

Recently, a business has found a way to further shed light on Ali’s lasting influence. Founded by Nick Rose Ntertsas, a cryptocurrency investor, Ethernity Chain is an online platform that uses non-fungible tokens (NFTs) to explore and push the boundaries of digital art. It aims to make sure that users are able to purchase such art and other digital assets safely while simultaneously supporting charitable organisations and causes. Its distinctiveness arises from its ability to allow NFT artists and NFT collectors to collaborate with each other and help those in need. 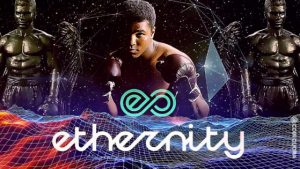 For its product regarding Ali, Ethernity Chain’s sports line, Ethernity Sports, has partnered with Muhammad Ali Enterprises (MAE) to create a blockchain that would help eternalise Ali’s lasting influence. MAE is a marketing and media services company that specializes in the promotion of merchandise and entertainment related to boxing and Muhammad Ali. Authentic Brands Group (ABG) is a marketing, brand development, and entertainment company that has partnered with Lonnie Ali – Ali’s wife at the time of his death – to own MAE as a trustee of Muhammad Ali Family Trust (MAFT).

The blockchain has been designed by Raf Grassetti, a prominent digital sculptor in the online NFT community. Having been inspired by Ali in both his personal and professional life, Grassetti wanted to use his skill and craft to work with up-and-coming technologies to celebrate Ali’s life and legacy through this collection. Ethernity Chain thought that this partnership with MAE and Grassetti works to further Ali’s dedication to helping and working for those in need.

The auction for the blockchain will begin on May 1 2021, at 12 noon EDT, on Ethernity Chain’s official website. Part of the proceedings will be given to the Muhammad Ali Centre as donations.