The ride sharing start-up that fully operates only electric vehicles, BluSmart has come out to announce that the company has successfully raised funds amounting to $ 25 million USD in a round of funding which took place in September 2021 but extended till now. Adding both parts of the round together, the company has raised a total of $ 50.7 USD.

BluSmart is an e-commerce platform where you can book electric vehicles which are ‘safe and sanitised’. The company is looking to break in to and revolutionize the automobile booking and cabbing industry while offering electric, sustainable, and clean vehicles to keep up with the modern growing society. The company was founded just over 3 years ago back in January 2019 and its head office is situated in Gurugram, Haryana. 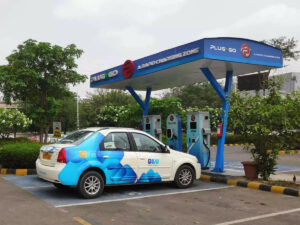 Out of the $ 25 million USD that the company has raised, $ 10 million USD has been through a venture debt, while the remaining $ 15 million USD was raised by giving away equity.

The company also raised $ 35.7 million USD a few months ago in a round by IREDA which marked the largest ever funding for an electric vehicle company ever in India.

The company was founded by Anmol Singh Jaggi and Punit K Goyal 3 years ago in 2019 and has been growing steadily every year. Currently, the company has operations only in the Delhi NCR region, but ever since its inception, the company has successfully completed over 1.6 million trips, as they travelled a distance of 50 million kms.

The company has said that their main goal is to reduce the carbon footprint in every major city in the country. They are also looking to make long distance travel using electric vehicles into the mainstream and normalise them. The company recently finished all their infrastructure and offers long electric car drives from the Delhi NCR to Chandigarh and even to Jaipur.

They are even present in all the terminals, both domestic and international, of the capital’s Indira Gandhi International Airport.

According to the company, BluSmart has grown by 25 times since its inception, due to keeping customers at the center of their model as well as inculcating the importance of having less carbon emissions. They also said that the company has EV based services as well as EV infrastructure making them the complete package.

BluSmart seems to have something special on their hands but only time will tell if they will make it big.