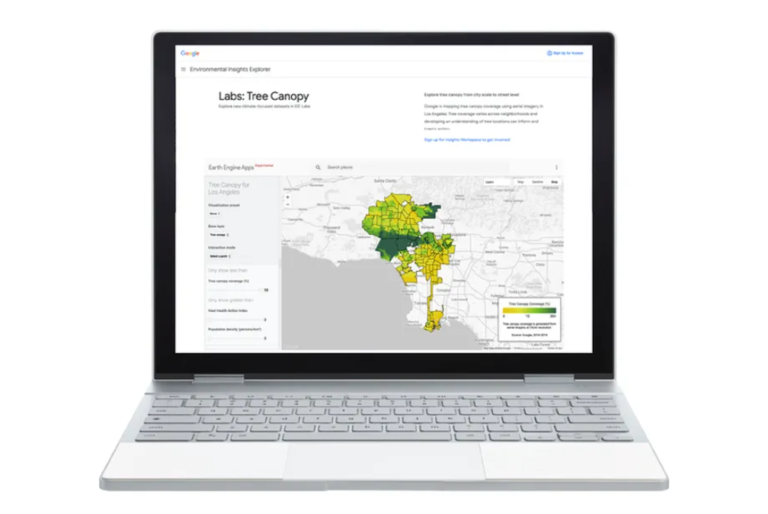 Users should be able to view wildfires, tree canopy, and sites without formal addresses more easily with Google Maps’ new capabilities. According to the company, it’s all about making communities “safer, more sustainable, and discoverable.”

Google said today that a new wildfire layer on Maps will begin rolling out internationally this week. It will display the majority of big fires around the world that have prompted evacuations. The layer’s red splotches and pins will show where blazes are and how far they’ve spread.

Users can get more information about a specific wildfire by tapping on it, such as how many acres have been burned, what percentage of the fire has bee n contained, and links to local emergency resources.

The map is updated every hour or so. It makes use of data collected by satellites and analyzed by Google’s Earth Engine geospatial analytic engine.

It expands on a feature that Google tested in California in 2019 and then rolled out across the US in 2020. The pilot let people in the United States to monitor the changing borders of a nearby wildfire in near real-time, but it didn’t allow users to view many fires at once.

That was a limitation since numerous fires might erupt in the same area at the same time during fire season, which is becoming longer and more intense in the Western US as a result of climate change.

Users in the United States will not only have a bird’s-eye perspective of nearby big flames, but they will also be able to see tiny fires on the map, which is a feature not available in other regions of the world. According to Google, Australia and a few other regions may gain the capability “in the coming months.”

However, there is one constraint that Google has yet to address with the wildfire layer. It can only be updated if the user is connected to the internet, which can be problematic when power lines and mobile towers are destroyed by wildfires.

The other two enhancements Google mentioned are mostly aimed at providing improved planning and mapping capabilities to local governments.

Last year, Google opened a Tree Canopy Lab in Los Angeles to help the city identify areas where more trees are needed. Increasing the amount of vegetation in certain areas is one strategy to decrease heat-related diseases and deaths in areas that are most vulnerable to heat waves.

Temperatures can range significantly from one neighborhood to the next depending on the amount of greenery present, a pattern exacerbated by the United States’ long history of racial segregation.

In 2022, Tree Canopy will be available in over 100 other cities, including Guadalajara, London, Sydney, and Toronto, according to Google. It uses photos obtained from a plane for Google Maps to map out the density of tree cover.

o use Google Maps. As a result, it’s become more difficult for parcels and emergency services such as ambulances to reach many individuals in rural areas and underdeveloped countries where addresses aren’t widespread.

As a result, Google today released Address Maker, a new program that makes it easier for governments and non-governmental organizations to create their own maps to fill in the gaps.

Address Maker is a follow-up to Google’s current Plus Codes, which allow users to share their position with a six-digit code rather than an address. (Plus Codes are also available for locations with standard addresses.) For example, the Plus Code for Google’s headquarters is CWC8+R9 Mountain View, California.)

A Plus Code for a location without an address will appear on Google Maps, but a route to get there may not. Address Maker intends to enable assigning Plus Codes to sites and charting previously unmapped roads for a whole community faster and easier for government and local campaigners. Plus Codes are accessible offline and employ an open-source algorithm.