Everything You Need to Know about DeSo

Over the last few years, cryptocurrency has been grabbing people’s attention as it makes it easier for people to invest and trade on a digital platform. Cryptocurrency and digitalization of buying and selling cryptos have taken a toll on how the investment works. Innovations and upgrades have paved a way for people to trade and invest without any hassles. For people who are new to investing, especially in digital money; cryptocurrency is decentralized money that is collected as binary data and is designed to work as a medium of exchange. Unlike traditional investing, cryptocurrency is saved as digital cash using binary data and it typically helps the investors in saving their money in digital form. There are varieties of cryptocurrencies embedded on various blockchains but one particular cryptocurrency that we are going to discuss today is Deso, short for Decentralised Social.

What is DeSo currency?

Decentralized Social is a native cryptocurrency powering the blockchain platform which is designed to support a wide variety of decentralized social media platforms. Just like most of the other currencies, Deso uses a token-based system on the Ethereum blockchain. This blockchain allows the peers to exchange the DESO tokens among them and use them as payment for micro-services within the network. It helps people by allowing them to post content, tag other users, comment, and like others’ posts. These tokens also serve as tools to incentivize user behavior that furthers the network. It also acts as a way to access special features within its network. For example, after a particular number of comments from various network users have been made, those people can spend their DESO Tokens to unlock the option to make polls within their postings. DeSo will enable fairer models of content distribution, provide new ways for hundreds of millions of social media users to interact, and serve as the foundation for a decentralized social media ecosystem, much like Bitcoin’s decentralization has sparked transformation within the traditional financial system.

DeSo is a new type of blockchain designed to power Web 3.0 decentralized social networks. DeSo has been working to alleviate the difficulties caused by current social media centralization since its establishment in 2019.

Who are the Founders of DeSo?

Nader Al-Naji started DeSo in January 2019. Al-Naji worked as a software engineer at the D. E. Shaw Group after graduating from Princeton University, and later at Google on the Google Search and Google Ads teams. Before DeSo, he raised approximately $133 million in 2017 to launch an algorithmic stable coin called Basis.

The DeSo Foundation unveiled the Octane Fund, a $50 million developer fund, in October 2021.

How does Deso work?

In terms of architecture, consider a Bitcoin node that has grown to be able to handle a far broader range of transaction types than just sending/receiving money, with a massive amount of bespoke storage and indexing logic tailored to enable social features at scale.

The best approach for non-developers to comprehend DeSo’s design and benefits is to go on to the following section, which describes everything in high-level terms. This developer guide is a fantastic starting place for developers interested in digging into the lower-level intricacies, and this code walkthrough is the best way to completely understand how everything works together. It may appear complicated, but it is written in simple English and should only take an hour or two to completely comprehend.

The DeSo blockchain enables both classic social functionality such as generating profiles and posting, as well as innovative blockchain-native features such as social tokens, tipping, and NFTs at launch. These qualities alone open the door to a slew of new money-related enterprises, ranging from social NFT experiences to influencer stock markets. Creators may earn orders of magnitude more money on DeSo-enabled applications than on traditional social networks while keeping more direct contact with their fans, thanks to these goods. DeSo’s business model revolves around transactions flowing through a decentralised network of potentially thousands of third-party apps, similar to how Ethereum works today for DeFi applications, so creators aren’t locked into a handful of centralised apps. We believe this more decentralised business model can come to replace the traditional ads-driven business model for social media, which inherently requires concentrating users into a few highly centralised apps in order to maximise the profits.

DESO is listed on Coinbase 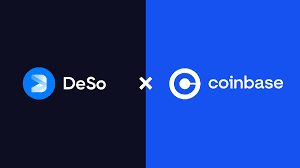 DESO is now listed on coinbase. Customers can now trade, transfer, receive, and store DESO and use it to buy “social tokens” and non-fungible tokens (NFTs), as well as create profiles and posts for Decentralised Social apps, according to a blog post. The layer 1 blockchain initiative promises to give social media platforms up to a billion users scalability.

Today, a few number of private firms effectively control public discourse and profit from monopolistic profits; however, content creators are frequently underpaid and under-engaged. DeSo’s social blockchain, on the other hand, considers social media material as a public utility, making it permissionless and open to anyone. DeSo blends the open P2P financial system paradigm afforded by cryptocurrencies with an efficient and scalable database infrastructure, specifically designed to usher in the next generation of Web 3.0 social networks.

Diamond, PolyGram, Cloutfeed, Pulse, and Supernovas are among the over a hundred apps built on the DeSo blockchain today.

What Makes DeSo So Special?

The DeSo blockchain allows both classic social functionality like generating accounts and posts, as well as innovative blockchain-native features like social tokens (creator coins), tipping, and non-fungible tokens (NFTs). From social NFT experiences to influencer stock markets, these features open up a whole new world of money-enabled goods. On DeSo-powered apps, these capabilities allow creators to more successfully monetize their work and engage with their audience.

Creators aren’t tied to a handful of centralised apps since DeSo regards social data as a public utility. All content on DeSo is maintained on a decentralised ledger and is instantly accessible to a broad and expanding network of third-party apps, similar to DeFi applications on the Ethereum blockchain.

The fact that DeSo is not a general-purpose blockchain is its major benefit. Instead, it provides a limited set of social-oriented features that it implements on bare metal, utilising unique indexes that each node creates during consensus when it syncs with its peers. This enables the DeSo blockchain to achieve highly scalable storage capabilities that no other general-purpose blockchain can match. For example, 1 GB of on-chain storage on DeSo costs only 1 DeSo, whereas even the best existing smart contract infrastructures take millions ($1,000,000+) of dollars to achieve. Due to the stringent transaction schema, DeSo has also declared that by the end of 2021, it will transition to a Proof of Stake consensus, which is estimated to attain a throughput of hundreds of thousands of transactions per second.

Why should people shift to investing in cryptocurrencies?

Digital asset markets are currently unregulated, with no formal UK, European, or US regulatory framework in place. Digital currencies are neither bank deposits, legal money, nor government-backed securities. The UK Financial Ombudsman Scheme, the UK Financial Services Compensation Scheme, the US Federal Deposit Insurance Corporation or Securities Investor Protection Corporation, or any other non-UK or non-US governmental or government-backed protections do not apply to Blockchain Access UK Ltd’s products and services.

Legislative and regulatory changes or actions in any area where Blockchain.com’s clients are situated may have a negative impact on digital currency use, transfer, exchange, and value.

Newest update about the Deso coin:

The DeSo Foundation, which was founded by the founder of social media site BitClout, has announced a $50 million fund to help develop a decentralised social media ecosystem. Things that come into play as a result of this large relocation:

Cryptocurrency is a brand-new asset class. Aside from possible day-to-day or hour-to-hour volatility, each crypto asset has its own set of characteristics. Before you deal, be sure you investigate and understand particular assets.

Thank you for reading my article. I hope you found it interesting and you learned about what you were looking for. Please share this article with your friends and families if you like it. Also, comment your views in the comment section given below.