Everything You Need to Know About Metaverse

Consider Ready Player One, but more approachable and practical. Consider today’s social media, but more integrated and immersive. The concept of the metaverse, which was recently popularised by Facebook’s renaming as Meta, will change how we interact with the world around us.

This has a number of consequences:

As it invests heavily in the metaverse, how does Facebook intend to confront and act on these difficulties and opportunities? 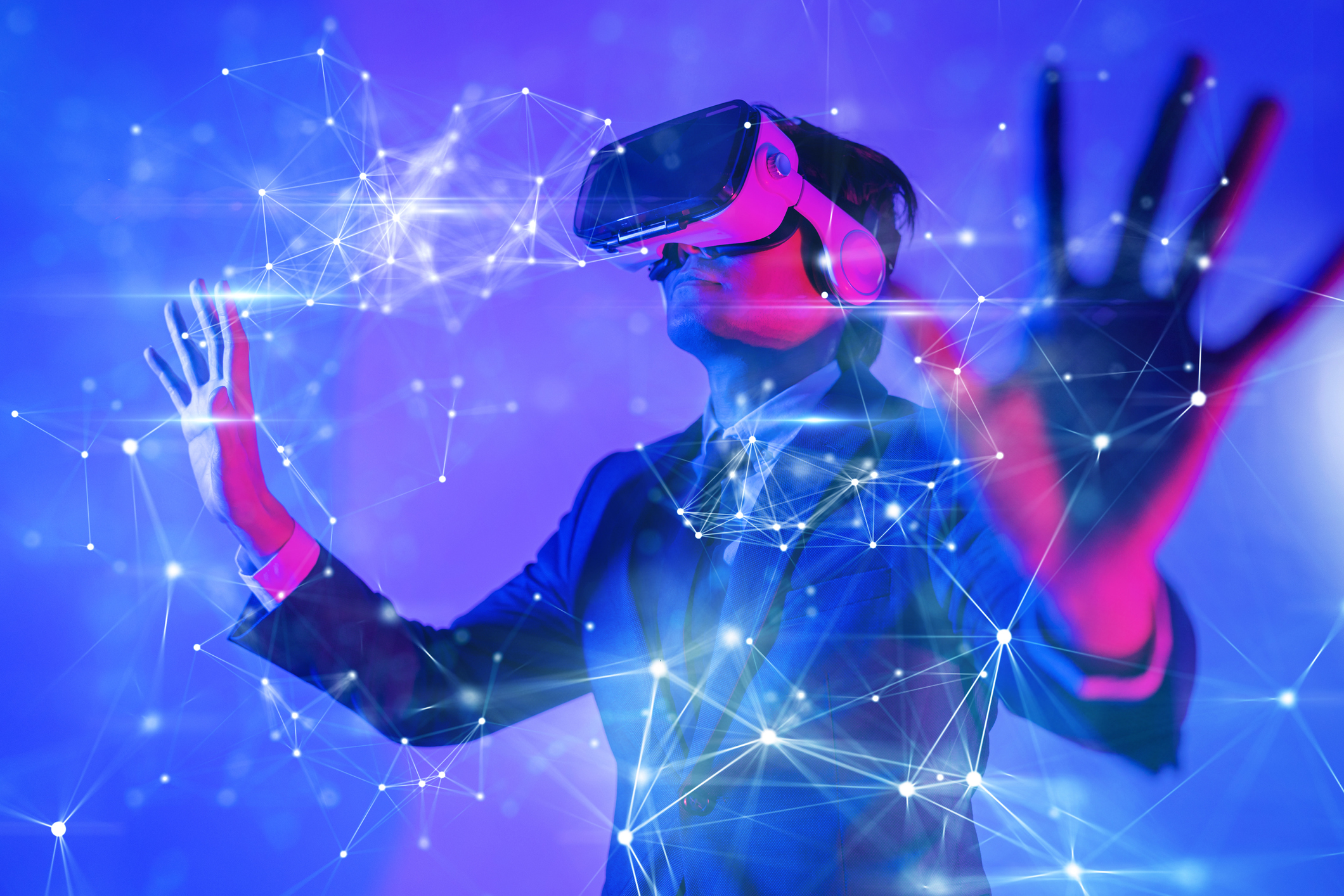 While the name “metaverse” may be unfamiliar to some, the notion has been around for nearly three decades. In his 1992 novel Snow Crash, American science fiction author Neal Stephenson established the metaverse. Users use metaverse as an escape from a futuristic, primarily dismal environment in the novel (like in others in the genre).

The industry has been laying the foundations for a non-fictional metaverse brick by brick for the past 30 years. Virtual reality headsets have improved in terms of comfort and price. The global internet penetration rate has been constantly increasing. The rise in popularity of online gaming, which has often reached tournament levels, has allowed for the creation of sophisticated digital avatars, transferable digital commodities, and even digital real estate.

Decentraland has received $25.5 million in funding and offers a virtual reality environment builder, configurable avatars, a crypto-enabled marketplace, digital wallets, and a governance system to its customers. Facebook is attempting to create a comparable experience, but one that incorporates non-AR/VR social networking. In September 2021, it announced its foray into AR/VR, as well as the creation of its own metaverse.

What Does ‘Metaverse’ Mean, Exactly?

Here’s an exercise to demonstrate how ambiguous and perplexing the phrase “metaverse” maybe: Replace the phrase “the metaverse” with “cyberspace” in a statement. The meaning will not change considerably 90% of the time. Because the phrase refers to a broad shift in how we interact with technology rather than a single type of technology, this is the case. It’s very possible that the name will become obsolete even if the technology it initially defined becomes mainstream.

The metaverse is made up of two technologies: virtual reality, which is distinguished by persistent virtual settings that exist even when you’re not playing, and augmented reality, which combines characteristics of the digital and physical worlds.

However, that does not mean that those locations must only be accessible through VR or AR. Metaverse is a virtual environment that can be accessed via PCs, game consoles, and even phones, such as Fortnite.

It also refers to a digital economy in which users can create, purchase, and sell things. Under the most utopian notions of the metaverse, it’s also interoperable, allowing you to transport virtual objects like clothes or cars from one platform to another.

You can buy a shirt in the mall and then wear it to the movies in real life. Virtual identities, avatars, and inventories are already confined to a single platform on most platforms, but a metaverse might allow you to create a persona that you can carry with you wherever you go as easy as copying your profile image from one social network to another.

It’s difficult to understand what all of this implies since you might say, “Wait, doesn’t it already exist?” when you hear descriptions like the ones above. The Environment of Warcraft, for example, is a persistent virtual environment where people can buy and sell items.

Rick Sanchez might learn about Martin Luther King Jr. through virtual experiences like concerts and a Fortnite display. You can enter your own virtual world by putting on an Oculus headset. Is that how “metaverse” is defined? Is it just a few new video game genres?

Yes and no, in a nutshell. To refer to Fortnite as “the metaverse” is akin to calling Google “the internet.” Even if you spend a lot of time chatting, buying, studying, and playing games in Fortnite, that doesn’t mean you’ll learn everything there is to know about the metaverse.

On the other hand, just as it’s true that Google produces bits of the internet—from actual data centres to security layers—also it’s true that Epic Games, the creator of Fortnite, is building chunks of the metaverse. It isn’t the only corporation that operates in this manner.

Nvidia, Unity, Roblox, and even Snap are among the companies building on the infrastructure that might become the metaverse.

At this point, most discussions about what the metaverse entails come to a halt. We have a foggy understanding of what exists right now in what we might call the metaverse, and we know which companies are investing in it, but we have no idea what it is.

Sorry, Meta, but Facebook believes it will include fictitious residences where you can invite all of your friends to hang around. Microsoft appears to believe that virtual conference rooms may be used to train new employees or communicate with peers who are located far away.

These futuristic perspectives have a wide spectrum of proposals, from hopeful to sheer fan fiction. During… Meta’s… metaverse presentation, the company depicted a scenario in which a young woman is sitting on her couch, scrolling through Instagram, when she comes across a video recorded by a friend of a concert taking place halfway around the world.

The film then cuts to the show, where the woman appears as a hologram in the Avengers-style.

In reality, it brings up the most serious issue with “the metaverse.”

Why Do Holograms Play a Role in the Metaverse?

When the internet was first introduced, it was accompanied by a slew of technological achievements, including the ability to connect computers across large distances and the ability to link one web page to another. These technical characteristics provided the foundation for the abstract structures we now associate with the internet, such as webpages, apps, social networks, and everything else that relies on them. That’s without considering the convergence of non-internet interface innovations such as displays, keyboards, mouse, and touchscreens, which are still required to make the internet work.

With the metaverse, there are some new building blocks in place, such as the ability to host hundreds of people in a single instance of a server (future versions of a metaverse should be able to handle thousands, if not millions) and motion-tracking tools that can distinguish where a person’s hands are. These new technologies have the potential to be extremely intriguing and futuristic.

There are, however, some limitations that may prove insurmountable. When companies like Microsoft and Fa—Meta show off imaginary videos of future concepts, they frequently gloss over how people will interact with the metaverse.

VR headsets are still awkward, and wearing them for long periods of time causes motion sickness or physical pain in most people.

So, how do IT companies demonstrate the concept of their technology without displaying the reality of massive equipment and strange glasses? So far, it appears that their main choice is to develop technology from the ground up. Is it the holographic woman who appeared during Meta’s speech? I’m sorry to break the news, but it’s simply not possible, even with the most advanced versions of existing technology.

Unlike motion-tracked digital avatars, which are a little janky right now but could be better tomorrow, there is no janky way of getting a three-dimensional picture to appear in midair without precisely regulated circumstances. Regardless of Iron Man’s assertions. Perhaps these are meant to be seen as images projected through glasses—after all, both women in the demo video are wearing glasses—but that assumes a lot about the physical capabilities of small glasses, which Snap can attest to being a difficult challenge to solve.

In film demonstrations of how the metaverse may work, this kind of deception of reality is widespread.

This demonstration raises far more questions than it responds to.

On some levels, this is acceptable. Microsoft, Meta, and every other company that does bizarre demos like this is seeking to convey an artistic sense of what the future might be like, rather than addressing every technology challenge.

It’s a long-standing tradition that extends back to AT&T’s display of a voice-controlled folding phone that could magically erase people from photos and create 3D models, all of which seemed impossible at the time.

However, this kind of wishful-thinking-as-tech demonstration puts us in a position where it’s difficult to predict which aspects of various metaverse visions will one day become reality.

The idea of a virtual poker game where your friends are robots and holograms floating in space could become a reality if virtual reality and augmented reality headsets become comfortable and affordable enough for people to wear on a daily basis—a big “if”—come true. If not, you could always play Tabletop Simulator through a Discord video conference.

When combined with the general pop-culture idea of holograms and heads-up displays (basically anything Iron Man has used in his last ten movies), these stories serve as a creative reference point for what the metaverse—a metaverse that tech companies could actually sell as something new—might look like.