Richard Branson has finally realized his much-relished dream of space travel. Although bad weather caused a minor delay of about 90 minutes, the space flight did touch the finish line successfully. This milestone move has opened new horizons for commercial space travel, and Virgin Galactic will proudly lead the crowd as it now holds the credit of being the first to step forth. Branson and the team who were planning to embark on the historic voyage late this summer decided to move the dates, thanks to a well-defined competitive spirit. Virgin Galactic thus becomes the very first to touch the finish line leaving behind Jeff Bezos and his Blue Origin. Bezos is set to take the milestone trip on the 20th of July. 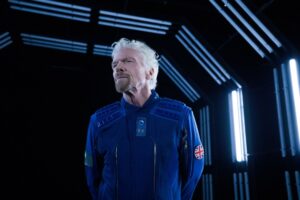 Ever since Branson revealed his plans to move up his date to the 11th of July, the atmosphere has been surging with excitement and anticipation. For the billionaire, the journey is the point where a long-nurtured dream touches the line of reality. While for the world watching it is the start of something absolutely novel and rare that the possibility of such an idea was unthinkable a few years before.

Overnight weather delayed the start of flight preparations, but we are on track to fly today with a newly scheduled time.

Although the weather caused a 90-minute delay, it did not taint the taste of the success of Branson and the crew. The spacecraft developed by Virgin Galactic managed to climb over 50 miles over the surface of the earth. Post the success of the adventurous voyage, VSS Unity touched the land again with flying colors at the Spaceport America facility in New Mexico. Branson and crew experienced weightlessness for over 4 minutes as they reveled at their view of the earth below and into the mysteries of space.

Welcome to the dawn of a new space age #Unity22 @virgingalactic pic.twitter.com/Rlim1UGMkx

The success of the trip is going to be definitely reflected in the future dealings of the company. Because pioneers always leave an indelible mark that works to their advantage. However, every coin has two sides. And this celebrated success of Virgin Galactic is not devoid of failures. Although what will be visible now is the bright ray of success.

Twitter has been buzzing with interminable excitement ever since the news of the trip began turning heads. The countdown to the space trip was well reflected across Twitter town as Virgin Galactic, VSS Unity, and Richard Branson made it to the trending list on Twitter. And the buzz is still on. Here are a few reactions from Twitter in response to the news about the trip.

Musk made his presence felt prior to the trip adding yet another highlight to the already brilliant trip.

And sometimes it’s wise to remember that every coin has two sides. Although most people choose to be oblivious to the bitter side.

Watching Richard Branson’s space voyage while watching people use GoFundme to feed their families is just a reminder of how wild capitalism is.

That’s one small step for man, one billion dollars for Richard Branson. https://t.co/3EGDtBP3bC

Well, some amount of excitement is valid here. After all, the man made it to the edge.

Everyone on earth to Richard Branson and his phenomenal team of Virgin Galactic reaching on the edge of space!#Unity22 pic.twitter.com/T9syD1WCuD

And for some people, the edge is not enough.

richard branson just took a plane up higher than planes normally go. fuck off with this “he went to space” stuff

“The brave might not live forever, but the cautious do not live at all”@richardbranson #Unity22 pic.twitter.com/x85NooCj53

"Dear billionaires, no one cares whom you beat to space." Richard Branson and Jeff Bezos are choosing a terrible time to leave Earth, @shannonmstirone writes. https://t.co/eElJbUZp0W

In weightless splendor, Richard Branson just spoke to his wife by encrypted cellular phone! Then he heard from a guy about his vehicle’s warranty expiring…

History is in the making #Unity22 is moments away to reach edge of the space, congratulations to @richardbranson and other four passengers for the great leap forward in space science Space Tourism is now a reality… Science has done it for human race yet again

Congrats @richardbranson on you picture perfect #VirginGalactic flight. I’m ready to go next!