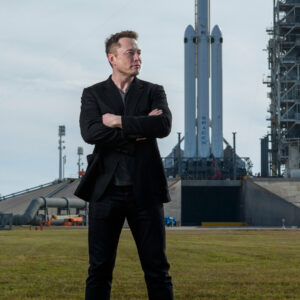 Elon Musk never fails to make news is an unwritten yet accepted fact. Whether it be his random musings on Twitter that can shake the markets or a simple post congratulating a friend. Musk always turns heads. At the moment Twitter is abuzz with the excitement surrounding Virgin Galactic and Richard Branson and the milestone space travel that has set another new page to history. However, Elon Musk has managed to tilt the axis point of attention to himself with a simple post congratulating Branson for the achievement. It is almost as if Elon Musk moves and a joke is in the making.

Twitter already could not keep calm as Musk decided to pay his friend, Sir Branson a visit prior to the much-awaited space trip. Branson’s Tweet with a picture of him and Elon had already managed to grab the attention of the Twitter town. Added to that was the news that the SpaceX owner has bought a ticket for a flight on his fellow rival’s ship. If you are in need of some tips about healthy competition, then take some notes from Musk. Despite being head to head in the race to establish their domain in the territory of commercial space travel, the billionaire was ready to extend his support towards Branson who apparently seems like a friend first and rival second.

The post exudes a certain warmth of friendship and looks like Twitterati is all for healthy friendships. However, what has caught the hilarious eye of Twitter town is yet another tweet from Musk replying to another of Branson’s Tweets. It is curious how people find elements of humor in the simplest of things. Here is the reply tweet from Musk that soon started a chain reaction of responses and jokes on Twitter. Or is it the irrefutable Musk effect that brings out the humorous part in people?

The Chain Reaction Of Responses

Twitter does not need a particular reason to begin a chain reaction of responses. Particularly when the catalyst involved is Elon Musk, the equation becomes all the more easy and convenient. A simple and visibly harmless “Congratulations, beautiful flight!” has created such a buzz that one cannot help but marvel at the hilarity meter that goes up at breakneck speed every time Musk moves a finger(not an exaggeration since every tweet and reply requires the systematic movement of a finger or fingers.) Here are a few reactions in response to Musk’s reply that are worth taking a look at.

Every story with Musk has these archetypal characters. Even if they are completely out of context.

Some people are quite incredulous about the ticket.

Elon today u visited Richard's, U too want to go in the flight.

Well, given that he bought a ticket, looks like he is planning to.

And some probable sour grapes coming onto the surface.

u tried..and he did not give you a ride. and you turned off the data when he was right there at the space! 😂

Some people really pay attention to the details that it is incredible. There is a man waiting to embark on an edge of the space journey and we have a soul wondering about shoes traveling to space.

Your shoes has been on space today? pic.twitter.com/uUrmHDLk5g