You have seen Facebook over the past two decades in a big blue and white letter F. But no longer you have seen it like this. On Thursday, Mark Zuckerberg announced that Facebook Inc. is changing its name to Meta. Facebook’s Connect event announced the same, saying he hopes, in the future, Facebook will be seen as “a metaverse company”. The change is along with a new corporate logo designed like an Infinity-shaped symbol.

Earlier in earnings call Facebook announced, the company plans to spend more than $1o billion this year on Facebook Reality Lab as it is building the ‘metaverse’ the next big computing platform.

In this case, Mr. Mark Zuckeberg said, Facebook has committed to building a composite virtual universe, virtual and augmented worlds that people cross seamlessly. He said this concept is known as ‘Metaverse’. He added it can be the major technology platform that several companies will build in the next more than 10 years.

On Monday, this social giant separated its virtual reality and augmented reality businesses into a division called Facebook Reality Labs.

This move shows that how Mark Zuckerberg planning to bet and focus on the next digital frontier, which can be the next digital world called ‘Metaverse’. Critics say Renaming Facebook may help the company deflect attention away from its controversies as it is facing spreading hate and discrimination.

“We have learned a lot from struggling with social issues and living under a closed platform, and now it is time to take everything that learned and help in building the next chapter,” CEO Mark Zuckerberg said during the annual developer’s conference.

He added, “I am glad to announce that from today, our company is now Meta. Our mission remains the same, still bringing people together. Our apps and their  brands, they’re not changing,”

Meta creates technologies that will help people to connect, find communities, and growing their businesses. When Facebook was launched back in 2004, it changes the way people connect and communicate. Now, Meta is growing beyond 2D screens towards real and immersive experiences like virtual reality and augmented reality.

In Greek, the term ‘Meta’ means ‘after’ or ‘beyond’. The overall concept of the Facebook company is to go beyond this face or in the present technology. 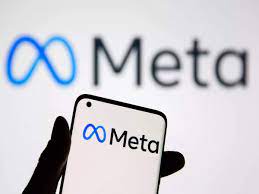 Meta has a new logo, which is something denoted for infinity. The company says that this symbol is “designed to show that how the metaverse will look and you can move in this universe limitlessly”.

The activist group calling itself The Real Facebook Oversight Board says that “Changing the name doesn’t change the reality. This meaningless name change should not distract from the investigation. and regulation”.

Since in recent weeks, Facebook is stuck in some controversies due to some leaked internal documents by a former Facebook employee. That documents showed how much the company knew about the harmful effects of what they are doing. This document was also published by The Wall Street Journal and then by the other media houses.

This Former employee spoke in parliament and urged them to investigate and regulate the social giant. On the next day, Facebook told its employee to preserve internal documents and communications since 2016 that concerned its business because of inquiries against the company.

On such criticism, Mark Zuckerberg said in an earnings call on Monday, “Good faith in criticism help us to get better, in my opinion, what we are watching is a coordinated effort to use leaked document selectively to draw a false picture of our company”.

The company was not any executive changes or restructured were announced yet. “No matter what he calls it, it will remain the Mark Zuckerbeg Inc. until he decided so power to other corporate governance.”

According to the note about Meta, Facebook’s corporate structure is not going to change. However, their financial reports will restructure. From the results of the fourth quarter of 2021, there will be two segments: Family of Apps and Reality Labs.

For months, Facebook is setting up plans for the metaverse. Last year, it released its newest virtual reality headset, the Oculus Quest 2. In August, it launched the virtual reality service Horizon Workroom, a virtual meeting room.

Following the name change, Facebook will be using a new stock symbol, MVRS from December 1, 2021

Meaning of living in Metaverse?

Mark Zuckerberg is demonstrating the ‘metaverse’ is like, it will beyond the internet technologies like with avatars, natural interfaces, teleporting, home space presence, digital goods these are some features of this metaverse.

Zuckerberg shows that living in metaverse will fell the same liking living in the real world but will feel more ‘natural and vivid’. One could be experiencing being in a digital space as almost as it was real, and also share the space with others.

According to Facebook, it can be possible that two people from different cities or countries, no matter, can attend any event like a concert or party together virtually or through holographic avatars. Work from home would be a different thing in the metaverse. Just log in and you will experience your office in your home like you are present there in person.

The key feature of this metaverse is that it is life, continues, and the endless world and doesn’t reset.

Facebook is not only just the company that wants to build this ‘Metaverse’. The plan is to give the experience of the metaverse free to the people and for that meta is going to sell its devices at subsidized cost to make them available for more people.

The AR and VR devices will be used for this metaverse experience such as Oculus Quest 2 or 3. There are some more expensive devices with more advanced technology like Project Cambria, which will be coming next year.

Facebook or, now Meta has already have the name in privacy-related issues for a very long. But Zuckerberg said that the metaverse will be built with keeping the User privacy in mind.

But still, it is unknown how the metaverse will keep the user privacy in this new world. It is interesting to know how will the meta handle these things between these controversial things.