Fake Call Centre Raided After American YouTuber Exposes Them 15 people related to the crime have been arrested.

The police of West Bengal raided a fake call centre and closed it indefinitely after an American based Youtuber exposed them in one his latest videos. The content creator in question is Mark Rober, one of the social media platform’s largest creators with close to 21 million subscribers.

The company that has been scamming people as their business is called MET Technologies that is based in Kolkata, West Bengal. Their main target group actually aren’t Indians, but are Americans, the British, and Australians. The firm was set up 12 years ago, back in 2010 and they have been scamming people ever since. The firm even grew in size as they ended up having about 1000 people working for them at its peak. 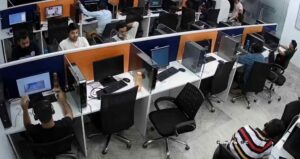 Mark Rober worked closely with fellow Youtubers Jim Browning and Trilogy media to lace the entire office with glitter bombs, rats, and pests. He originally contacted the Kolkata Police Force to report their complaint against the company but at first, it was initially brushed aside. But after some time, he has had fruitful conversations with the police force. The man’s work has now caused many call centres in the country to be shut down and disbanded.

The police investigation is still going on, but they have collected some crucial evidence and made swift and great progress to figure out the upper brass people who handle many of these scamming companies. Employees passports and proof IDs, the company’s passbooks, and other documents, and many of their assets have all come to custody of the West Bengal Police Force.

15 people related to the crime have also been arrested.

There have been many Youtubers over the past few years calling scamming companies which are mainly based in India and exposing them. Seeing them panic and not knowing what to do have been the main appeal to their virality and many people flock to their videos having been a victim to these types of customer care scams in the past.

Mark Rober took to Twitter to celebrate the news in joy as he shared screenshots of news articles speaking of the arrest. The tweet has been up for just under 3 days and has garnered well over 13,000 likes and has crossed 1,000 retweets. His video on Youtube has been up for 7 days and has gone viral as it has crossed the 30 million view threshold and continues to grow adding well over a million views daily.