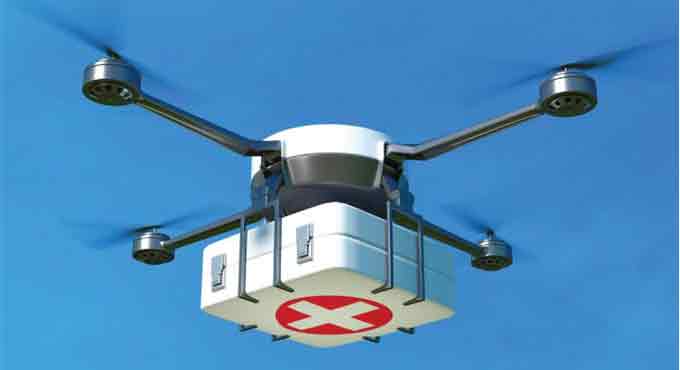 The Bengaluru based e-commerce giant- Flipkart, on Friday, June 11 announced that it will be teaming up with the Telangana State Government to lead a collaborative project that is in development. The execution of the drone deliveries of medical and other essential supplies to remote areas in the state will be done under the ‘Medicines from the Sky’ project. For this, Flipkart will be using its tech-enabled supply chain and deploy the drones and enable deliveries of medical supplies.

The project will be executed with the help of features like geo mapping, routing of shipments and track and trace of location etc., that the company has developed in its many years of existence to supply to billions of customers across the entire nation. These technologies will be used to conduct a Beyond Visual Line of Sight (BVLOS) delivery system to access the remote areas of the state where the roads and infrastructure are unreachable and the vaccines cannot be sent via roads.

The project in collaboration is expected to be conducted for more than six days. The pilot project will be tested to deliver thousands of vaccines and medical essentials while also keeping in mind all the safety and efficiency parameters and protocols.

Ranjeesh Kumar, the Senior Vice-President and Chief Corporate Affairs Officer at Flipkart, in a statement said- “The Covid-19 crisis has pushed the envelope in the rapid development of scalable and robust technologies and the Medicines from the Sky project is a testament to that. It is a decisive step in making use of cutting-edge technologies for the safety and wellbeing of the masses.”

Talking further in his statement, he added- “We are proud to partner the Telangana government in leading the consortium by utilising our nuanced understanding of supply chain and technologies governing automated movement of shipments in fulfilling the dire needs of citizens across the state. This pilot will set the premise for the utilisation of drone systems in providing healthcare and product delivery in remote areas and even during disasters.”

Jayesh Ranjan who is Telangana’s Principal Secretary, IT and I&C, said that the state has been a pioneer in using the new technologies to improve and make better the lives of the people and citizens.

Today Bangalore, a city in Telangana, had become a hub for all major IT companies and giants in the country. Some might even call the city as the ‘Silicon Valley of India’.

Jayesh Rajan, in a press release, said in a statement that making use of the drones ro deliver healthcare and medical supplies to the people in remote locations and inaccessible areas of the state is “one-of-a-kind” initiative that has never been taken in the country before. The Government is really happy to lead this initiative along with the collaborative partners such as the e-commerce giant Flipkart. This is going to go a long way to test out the “best-in-class” technological solutions to face the future hurdles.