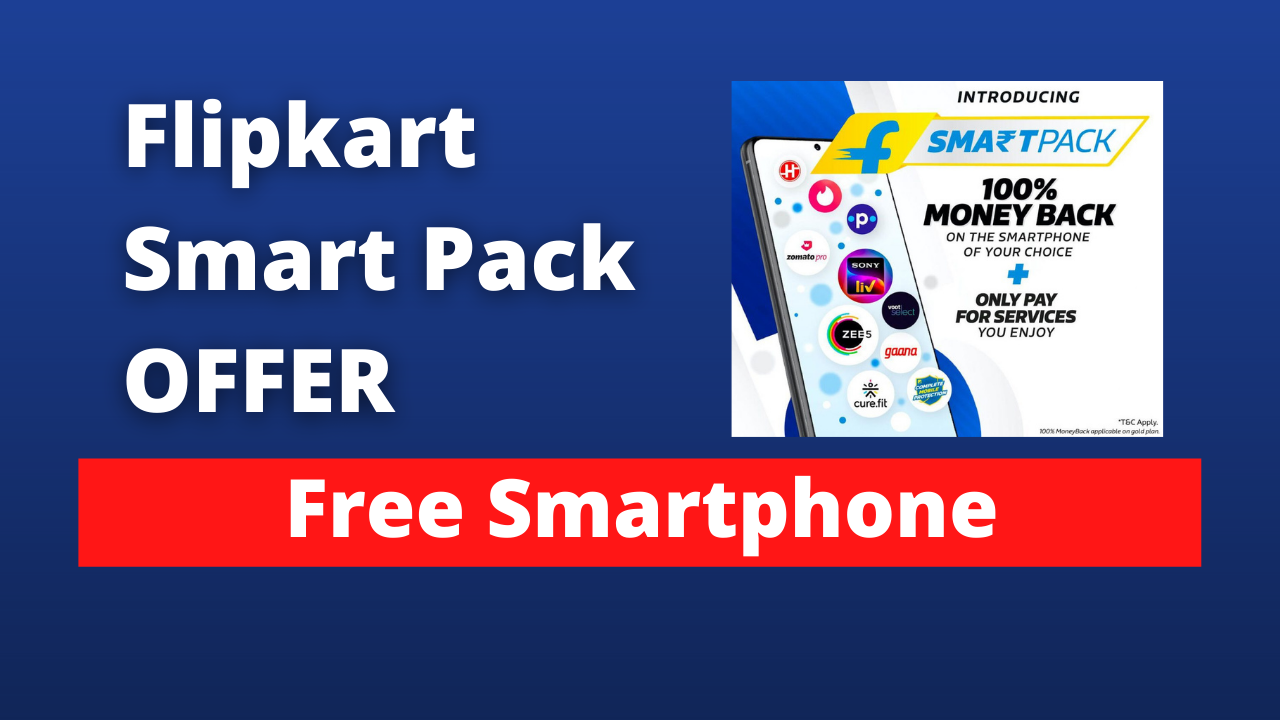 Walmart-owned Flipkart has recently launched its latest ‘SmartPack’ feature wherein it claims to offer smartphones with a 100% money-back guarantee. This means that Flipkart is actually claiming to give you a smartphone device for free to use under the SmartPack subscription plan for 12 or 18 months.

You must be wondering if it’s true! Well, yes, it is! Atleast Flipkart claims that it is and it saves a consumer’s money. Let’s find out the truth.

What is Flipkart’s SmartPack Offer?

Flipkart SmartPack offer is a subscription-based scheme which applies bundled with the purchase of a new smartphone. There are three plans under this subscription model: Bronze, Silver and Gold which offer different moneyback plans depending on whether the user chooses to return the smartphone after 12 or 18 months of use or not.

Under the SmartPack offer, the user can buy bundled subscription plans of premium OTT services including Zee5, SonyLIV Premium, Disney + Hotstar, Gaana+ among many others.

Flipkart claims to accept the smartphone after 12 or 18 months under any working condition with guaranteed money back of 60% to 100%, which means that a user will be able to use a new smartphone for one whole year and get his/her money back.

In case the user chooses not to return the smartphone, the SmartPack offer still provides money-back guarantee from 20% to 60% which seems like a great offer, but is it?

However, the offer only applies to affordable budget smartphones which cost somewhere within the range of INR 7,000 to INR 17,000. Smartphone brands include Micromax, Oppo, Motorola, Samsung, Vivo, Infinix, POCO and Realme.

Till now, the offer must seem completely valid and exciting for an average consumer, but here is the catch.

These services come in a bundle and the buyer does not have a choice to select the services he/she desires. Thus, he ends up paying for the whole package including the services that will never be used.

This pack also includes a complete phone protection with extra coupons for several different brands. You still must think that this is the best offer you have ever seen, but trust me! It is not.

The truth about these extra services is that one can buy these services individually for a lot lesser price than what Flipkart asks from you. As mentioned in a report by gadgetstouse.com,

If a user selects a smartphone that costs INR 14,999, he has to pay a total amount of INR 16,358 which also includes the monthly SmartPack offer for INR 1,359. This total amount has to be paid upfront at the time of purchasing the smartphone.

This means that after purchasing the smartphone for INR 14,999 and paying the amount upfront, the user will also have to pay an additional INR 1,359 every month till the period of 12 months or 18 months end to continue using the additional services that come with the Flipkart SmartPack bundle.

By the end of one year, the user will have paid INR 31,307 for the smartphone he purchased which includes the original cost of the smartphone and the SmartPack subscription bundle.

Hence, the total amount paid by the user will still amount to INR 19,308 after the user has returned the phone and received the moneyback value. This amount is spent by the user after using the smartphone for one year.

Furthermore, another truth about this offer is that the amount of INR 19,308 that the user has spent for his SmartPack subscription originally just costs INR 9,000.

Yes! If the user buys all of these services individually for one year, it will cost him only INR 9,000, so why is Flipkart asking for this additional INR 10,146 from its customers? This is the SCAM which is questioned by analysts, market players, users and critics.

In several reports, people have been saying that smartphone value after one year will be a lot less if sold in the market compared to what Flipkart is offering.

The argument is absolutely valid, for a smartphone that costs INR 14,999, the moneyback value that Flipkart is claiming to return will be INR 12,000. For if the smartphone had to be sold in the outside market, the value that the user would get barely amounts to INR 7,000- INR 8,000.

But, even if you less this amount from the additional INR 10,146 that you are paying to Flipkart under the SmartPack offer, you will still be paying INR 6,145 for absolutely no reason at all.

This is the real truth behind the Flipkart SmartPack scheme and even if you don’t consider it a scam, at least consumers should be aware of what they are dealing with under this offer. As per the calculations mentioned in the report by gatgetstouse.com, it is pretty much clear that Flipkart is robbing users off their hard-earned money. Therefore, it is highly recommended to go through each and every point mentioned in this article to truly understand the concept with which the e-commerce company is selling its SmartPack offer. According to several reports through verified sources, it is clear that Flipkart’s latest offer is a scam and users should not purchase their smartphones under this scheme.