FM Sitharaman says the government sued ones cheating banks, buying back money She stated how the banks will get back the money that was stolen through cheating. 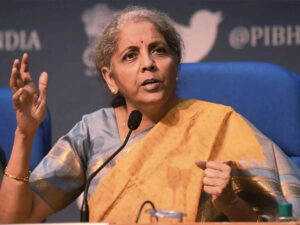 Last week, the Finance Minister of India, Nirmala Sitharaman made new announcements regarding steps set to be taken by the Indian government. She stated how the central government has promised that ones who scammed the banking systems, and took off were caught and made sure to deal with justice proceedings.

Further, the minister noted that the fund that government got hold off through the auction of such people’s belongings such as properties and effects, would be given back to the concerned banks as soon as possible.

In her statement, she promised these organisations that ones cheating them and running away were thoroughly pursued by the authorities. She specified how the funds generated from the auctions would be thus transferred back to the ones deserving it. Additionally, Sitharaman said how this is being done repeatedly, ensuring maintenance.

The current government is handling the issues of legacy of the past ruling governments. Mainly, this is being carried out through the clearance of the pressures on the banks of the public sector. She further noted that though the previous ones played out public welfare schemes, the present one has given the citizens the power instead of just providing them with a title.

What else did Sitharaman note?

She went on to say how every citizen of the country should have the means to bare minimum advantages without being answerable to anyone in particular. The current government’s way is based on ’empowerment’ by means of the fulfilment of established right, rather than just giving the name of the power.

In the Economic newsletter, she addressed the citizens stating that if the authorities had covered all the entities that deserve a return, then ‘saturation’ had been reached. As the 75th Independence arrives, she stated how there have been multiple steps taken to try and improve the lives of the poor people in some or another in past seventy five years.

Sitharaman specified how the calls to eradicate poverty from the world and, and progress that the head comes in with as they introduce schemes benefitting people in need, are quite different. The distinction lies in this new ideal that would reach everyone who deserves a chance.

The poverty eradication call or ‘garibi hatao’ was introduced during the rule of Indira Gandhi, the former prime minister. Mainly, this was at the time of her election campaign in the year 1971.