Arbitrum, an Ethereum-based second layer expansion rollup, has reached a total value locked (TVL) of $1.5 billion among the protocols that employ its services. After a rumour spread on social media that the protocol might be intending to launch its own token in the coming days, the smart contract saw an influx of more than 1 billion dollars today. The second layer only went live on mainnet a few weeks ago. 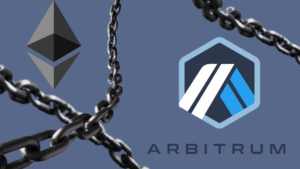 Arbitrum, an Ethereum L2 scaling solution, has reached a new milestone, surpassing $1.5 billion in TVL in less than two weeks since launching its mainnet. According to information from L2Beat, it saw a large influx of liquidity yesterday, with more than $1 billion entering the network.Despite the fact that Ethereum heavyweights such as Compound and Aave have yet to embrace Arbitrum, Ethereum protocols are still upgrading their frameworks to include Arbitrum services.

The majority of people are flocking to Arbitrum’s first farming platform, Arbinyan (related to the nyan cat meme). Arbinyan has 1.48 billion TVL, which means that practically all of the funds in Arbitrum have been transferred to take advantage of the farm’s incredible outputs (3,314.70 per cent APY in the Nyan pool at the time of writing).

Rumours of the Day

However, there could be another explanation for these funds’ migration to the Arbitrum layer. On social media channels such as Twitter, a rumour concerning the possible issuance of a native coin as an airdrop surfaced yesterday. Cobie, a cryptocurrency influencer, enquired about it and stated:

“Do you think the ETH L2s (Optimism/Arbitrum) are going to do a dydx/uniswap-style retrospective token drop?”

Apart from the hearsay, Off-chain Labs hasn’t said anything about the possibility of issuing a native token. Arbitrum was forced to clarify the situation on its own Twitter account. It stated, “Reminder: no Arbitrum token exists.” Any token that claims to be an official Arbitrum token is a ruse.

Users of Ethereum are always on the hunt for protocols that don’t have a native token, hoping for an airdrop. Dydx, a decentralised derivatives exchange, airdropped the native token to its customers last week. Some of the protocol’s most active users received $50,000 in exchange for using the platform. This is why there is so much speculation about the protocol issuing a native token.

What are your thoughts on the rumours of the native token issuance? Let us know in the comments section.