Greyp Bikes, a firm created by Croatian entrepreneur and visionary Mate Rimac, has added cryptocurrency payments to its online billing system. Thanks to a partnership with payment processor Paycek, all of its high-tech bicycle products may now be purchased using nine different coins. 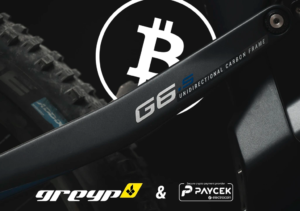 Greyp Bikes, a Croatian company seeking to be among the world’s technology leaders in the cycling industry, has taken another creative step. Through a partnership with Paycek, the country’s biggest crypto payment processor, the company has added support for payments using nine main cryptocurrencies: BTC, ETH, BCH, XLM, XRP, DAI, EOS, USDT, and USDC. Greyp News for Everyone! was recently announced. Cryptocurrencies can now be used to purchase Greyp bikes directly.

The Sveta Nedelja-based producer of high-performance e-bikes stated, “Greyp has always been at the forefront of technology in the bicycling world, therefore this was the next obvious step to take in the ongoing growth of the brand.”

Customers could buy Greyp motorcycles using cryptocurrency before the relationship with Paycek, according to the firm, but crypto payments have now been expedited and fully integrated into the online checkout process at Greyp.com.

Paycek is a platform created by Electrocoin, a Croatian financial firm. Other local businesses have already begun accepting cryptocurrency thanks to the payment processor. Earlier this year, Paycek enabled over 45 Tifon gas stations around Croatia to accept crypto payments, while Electrocoin enabled Croatian Post to offer a crypto exchange service at its post offices two years ago.In an article about Greyp’s decision to integrate cryptocurrency payments, the Total Croatia news portal said, “The move should come as no surprise to anyone who observes what Livno-born entrepreneur Mate Rimac does when it comes to both his cars and his motorcycles.”

Greyp Bikes was formed in 2013 by the Croatian entrepreneur as a sister company to Rimac Automobili, a producer of electric sports cars that he founded in 2009. Porsche and Hyundai, both part of the Volkswagen Group, now hold a portion of the automotive firm. Porsche and Rimac announced the formation of a joint venture in July that will include Volkswagen’s high-performance Bugatti brand.

Greyp’s cryptocurrency integration isn’t the only example of this in the cycling business. Toba Electric Bikes, situated in the United Kingdom and selling e-bikes from the Spanish manufacturer BH, added support for BTC and BCH payments in 2018 and released its own utility token in 2019 in conjunction with SLP-centric trading site Cryptophyl.