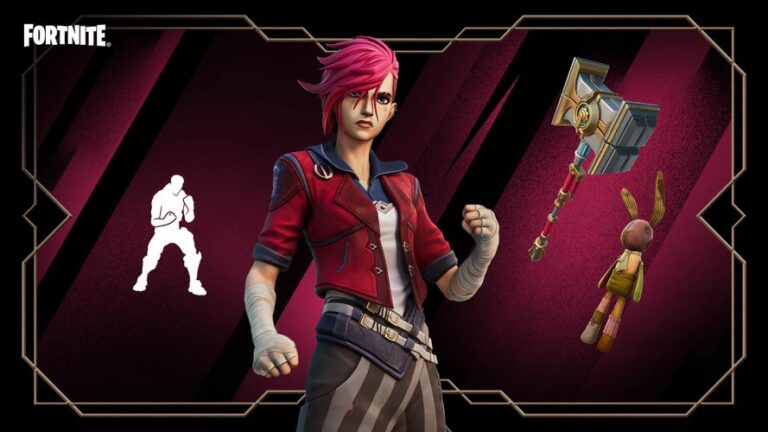 Vi from League of Legends is one of the main protagonists of the successful Netflix series Arcane that has officially arrived in Fortnite. Fortnite data miners have discovered that the Arcane Vi skin first appeared on Dot Esports. There is an older sister, Jinx, previously featured in Fortnite, who fights crime as a guardian in the city of Piltover. Jinx is a dangerous troublemaker with a penchant for explosions and risk-taking, and Vi is a street thief-turned-cop who makes up half of the Piltover Agents crime-fighting pair with Caitlyn, another character from the game and entertainment.

Jinx, a character from the show, hit the Epic Games Battle Royale hit last year, and another character from the show will improve the skin pool. The addition of Vi to the popular battle royale title makes her the second Arcane character to arrive in Fortnite along with her sister Jinx. Vi won’t be entering the item shop alone, as Arcane Jinx makes a triumphant return to the shop.

Jinx skins were hugely popular when it was first released on Fortnite a few months ago. The Arcane Jinx Fortnite pack includes Pow Pow Crusher Pickaxe, Jinxs Dream Monkey Back Bling, and finally the Playground lobby track. Additionally, if you purchase this complete Vi pack, you will also receive a unique loading screen that includes Vi and Jinx.

As usual, Fortnite data collectors have been quick to go through the files looking for upcoming content, and one of the items they unearthed appears to be the result of a collaboration between Fortnite and Arcane. After Jinx was released on the item shop, some fans wondered if Fortnite would include other Arcane characters.

The character from the hit TV series Arcane is returning to Fortnite, and this time, Jinx takes his sister, Vi, on the journey. The League of Legends (LoL) champion has reached new levels of glory after appearing in the wildly popular Netflix series, and Fortnite has once again teamed up with LoL developer Riot Games to let players roam as a dynamic duo in the new chapter.

The Arcane Vi skin bundles Zaun’s Reminiscence Decorative Back, his oversized Piltover Warhammer Pickaxe, and an exclusive Punching Practice emote. In addition, the Jinx Fortnite skin will be re-listing in the store along with its sister for a while, as will the Jinx Arcane Bundle. All Jinx debut items will be available again, including the Jinxs Dream Monkey Back Bling, the Pow Pow Crusher, and the Playground Lobby Tracks (Instrumental).

The Fortnite Vi skin will likely be available on the in-game store as part of the new League of Legends Arcane Bundle, priced at 1,500 Vbucks for the Vi skin and 2,000  Vbucks for the bundle and all items. This seems like a pretty cool addition to Fortnite’s huge roster of guest characters, and it makes sense to see more of the mystery characters land in the hugely popular battle royale following last year’s partnership between Riot and Epic Games. This collaboration is of great importance to both Epic and Riot Games as the Arcane x Fortnite event was a huge hit with fans.