FreeBot Magnetic Balls Can Move Independently and Join Together

Although the field of robotics has opened the doors for new possibilities there are still some restrictions which some robots must face. Robots which don’t have any legs find it difficult to climb up the stairs or get down. Also, there are a majority of robots which cannot walk on uneven grounds.

Keeping all this in mind, a new technology which consists of a modular self configuring robotic system has been introduced. To explain this term, it stands for a robotic enterprise which is capable of constructing itself out of modules which are able to connect to one another in order to carry out a certain task.

MSRR’s also has a certain restriction which they face. In order to carry out any task, they require gender opposite components which can turn out to be limiting in some circumstances. In order to address the issues a team of researchers at the Chinese University of Hong Kong, Shenzhen, has now developed a system which is capable of overcoming such restrictions.

The team is led by Tin Lun Lam. Under his guidance the team was able to device a system comprising of modular robotic “genderless” vehicles. These vehicles are capable of morphing into whatever shape that is required.

According to the researchers, this system has fewer physical restraints and it does not demand for the components to be precisely aligned with one another. This allows the system to attain a greater variety of configurations and also makes the connections simpler and can form in an instant.

The name of this system is FreeBot. The FreeBot are made out of two elements which are a ferromagnetic shell that is spherical in shape and an internal magnet. According to Lam, the FreeBot has more advantages compared to most other MSRR systems.

Lam said, “FreeBOT has the same basic functions as the most advanced MSRR: module independent motion, connection/separation between modules without manual assistance and system reconﬁguration.”

They added further that, “However, the previous MSRR module is equipped with multiple actuators for different tasks, which increases the weight, volume and manufacturing cost of the robot. FreeBOT has only two motors for these tasks, but it can form an MSRR system with fewer physical constraints.”

The magnets that are present inside can be triggered to connect to each other when it senses a Bot near it. It is possible to disconnect them by simply steering away from one another.

The team has also demonstrated on a video that the FreeBot is capable of climbing up the stairs. The FreeBot makes use of gravity and magnetic force in order to move together in various directions. 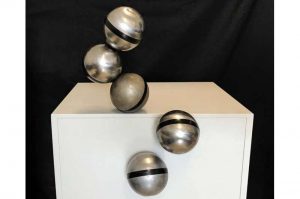 The details about those research studies are published in a paper titled, “FreeBot: A Freedom Modular Self-reconfigurable Robot with Arbitrary Connection Point – Design and Implementation.” The researchers also discussed their work at the IEEE / RSJ International Conference on Intelligent Robots (IROS).

This innovation can prove to be fundamental when it comes to designing and developing robots which need to be capable of carrying out various tasks, including going up the stairs.