Gary Gensler, the chairman of the US Securities and Exchange Commission (SEC), is scheduled to testify before a Senate committee on September 14 to say that cryptocurrency exchanges may need to register as securities exchanges, according to his belief. 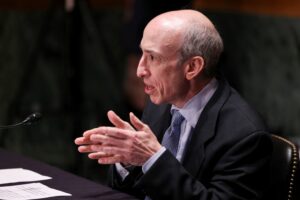 SEC has increased its oversight of cryptocurrency exchanges

According to Gensler, the current crypto industry does not follow regulatory frameworks that protect investors and consumers from illegal activity. He also emphasized the importance of consumer protection in the new asset class. He stated This asset class is rife with fraud, scams, and abuse in certain applications. We can do better”.

The SEC’s chairman previously stated that the agency was prepared to take on cases involving cryptocurrencies. While he emphasized investor protection, he also stated that federal financial regulators should be “ready to bring” cases against bad actors in the cryptocurrency industry.

In August 2021, Garry Gensler wrote a letter to Senator Elizabeth Warren (D-MA) highlighting the lack of protection for digital asset investors. The SEC chairman went on to say that regulators should have “plenary” or “complete” authority over the cryptocurrency market. Although the SEC lacks the authority to regulate cryptocurrencies, Garry Gensler urged Congress to regulate digital asset exchanges.

His latest remarks also emphasized that the securities regulator is working with the Commodity Futures Trading Commission (CFTC) which has overlapping jurisdiction in the crypto market. In addition, the securities regulator is also joining forces with the Federal Reserve, Department of Treasury, Office of the Comptroller of Currency, and members of the President’s Working Group on Financial Markets.

As many platforms allow trading for hundreds of tokens, Garry Gensler asked crypto platforms to contact the SEC to express their concerns. He went on to say that the legal standing of each token is determined by the facts and circumstances surrounding each individual coin. The agency’s chair went on to say that these trading platforms with 50 to 1000 tokens are unlikely to have no securities.

In his prepared message, Gensler emphasized that his opinions are his own and that he is not speaking on behalf of the other Commissioners or the agency’s staff. Given that many tokens could be regarded as securities, Gensler continues to suggest that crypto exchanges could be unregulated securities exchanges. Ethereum is a non-security commodity, according to CFTC Commissioner Brian Quintenz, who recently defined the classification of the second-largest cryptocurrency by market capitalization.