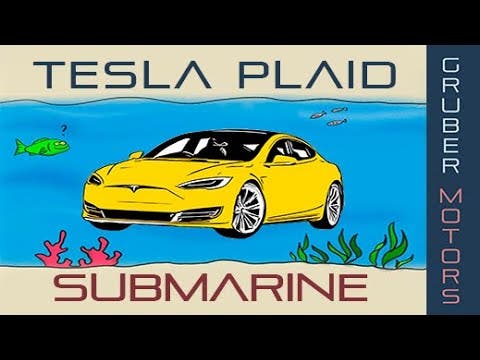 An interesting video was released by  Gruber Motor Company as they prepared the Tesla Model S Plaid to turn into a Submarine. The ending may not be totally satisfying, but definitely worth a watch as the vehicles could add on additional 4k pounds and still wouldn’t sink.

The submersion took place in a manmade pond in Arizona. Where Tesla Model S Plaid which was fully waterproofed as much as possible was sent to the location. This is not the first time the company has tried something like this. Chet has launched his YouTube channel with the video of a $130,000 electric car going underwater.

The Tesla Model S Plaid went 90-foot-long drive under 7 inches inside the manmade pond with fresh water and fish. Also, 2,000 pounds of lead ballast and a driver with scuba equipment inside the car. The owner of Gruber Motor Company, Pete Gruber explains,  “The goal today is to take a Tesla Model S Plaid and prove that these cars are waterproof to the extent that it can be turned into a submarine and drive through this 90-foot trough about six feet deep all the way through and come out this side here.”

Turning the vehicle into a submarine

Though he stated that these cars are already waterproofed, the company also took its own measures to ensure the car can turn into a submarine. Things like closing gaps, connectors, etc have been done prior to the experiment. Stated as “Connectors have been sealed. Certain gaps have been closed. And what we’re hoping, of course, is that the drive will be able to go all the way through this trough completely submerged at certain points and come out the other end intact and continue to drive his Tesla Model S Plaid.”

It was a fully prepared submersion, unlike practical application. There was a rescue team, with snorkeling gear just in case the vehicle needs to be bought up manually. Some details in the video may not be clear, but evidently, the car doesn’t seem to have been fully sunk in the water. Cameras located inside the water show us that the tires didn’t reach the ground.

Technically the car isn’t a submarine, it was a slow, cautious and safe drive with all kinds of precautions. Yet the feature of the vehicle is impressive as Model S Plaid already broke many records with its speed. This is something beyond the expectations for all the Plaid owners out there.

Notably, Tesla cars are known to be waterproof up to a large extend. In the recent floods in Europe this year, Tesla cars were known to be the savior of the day as they were the only cars that were passing through 4 feet of water. Elon Musk himself noted that their cars were water-resistant, but also added that the vehicle may not be fully waterproof.