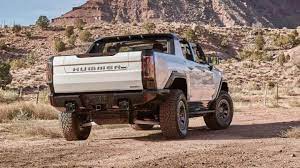 Reports suggest how automobile giant General Motors is not keen on people purchasing any of its new, in-demand models, like the GMC Hummer EV to just sell them off rather fast for profit. GM is reportedly coming up with various vigorous ways to dissuade this particular action. Turns out, the automaker is ready to do this despite it possibly leading to them losing a number of customers.

The President of General Motors for North America, Steve Carlisle reportedly informed the team of the dealership that GM is set to counter the ‘transferability’ of some ‘warranties.’ Specifically, this is if the car which the person is reselling , was bought within the span of the past one year. This was revealed by a letter which concerned news outlets got hold of.

Carlisle went on to inform how the company would the ban the seller from being able to reserve or place ‘future sold orders. ‘ This would be mainly for some of its models which the company considers to be in high demand. He specified how the models which would bear the impact of this regulation are the Chevrolet Corvette Z06, 23MY Cadillac Escalade-V, along with GMC Hummer EVs- SUV and SUT.

GM’s current state in the market:

For a while now, General Motors has been fighting to stay in pace with the rising demand for the Hummer EVs. The company stated the reason for this was as the vehicles were made from scratch, and was built ahead of its newly launched Ultium EV platform.

As specified by reports published a few weeks ago, General Motors has only been focused on manufacturing up to a dozen models of Hummer EVs everyday. According to a spokesperson from the company, GM’s output is set to a sharp escalation later on in 2022. However, sources specified how GM has more than 70,000 reservations for the model, and many might get impatient and choose to buy it from a reseller instead.

Carlisle spoke about how vehicles are resold rather fast specifically by ‘unauthorised dealers or resellers’ which clearly does not match the standards of General Motors. This leads to harming the brands of the company, and affected the buyers’ experience.

Further, he stated how the implementations of these updates are mainly to make sure to maintain the perfection of the customer experiences. Additionally, to make sure the automaker’s brands remain strong, and aid in prioritising ownership by customers who are genuinely loyal to the company. Alongside, an announcement from General Motors stated it is giving reward points worth $5,000 to ones who would keep their 8th generation Corvette model for 12 months.