GM to ramp up its electric vehicle assembly plants

General Motors announced that it is ramping up its electric vehicle assembly plants. It includes the EV Chevrolet Bolt and other vehicle production hikes. Its highest quarterly reports were reported recently with Chevrolet Bolt EV and Bolt EUV sales of 14,709 units. Bolt sales were down by 11% for the first nine months. 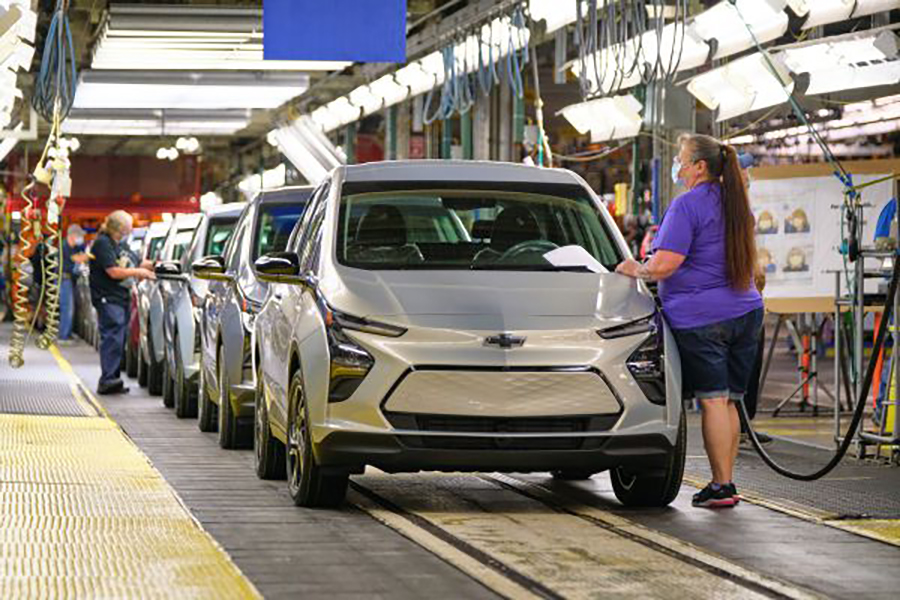 In June, GM said it would sharply cut Bolt prices after it halted sales for six months following a battery recall. GM will boost Bolt production for global markets to more than 70,000 in 2023 from about 44,000 vehicles this year, it said on Monday. Bolt sales in 2021 hit a record annual high of 24,828 vehicles. The largest U.S. automaker said it was moving up body shop upgrades at its Detroit Factory ZERO for Silverado EV production in 2023 and taking other steps to prepare.

GM will pause production of the GMC HUMMER EV Pickup for several weeks starting in late November to prepare for that production jump, it said. Cadillac Lyriq production will increase in the fourth quarter and GM plans additional production shifts for GMC Hummer EVs in 2023, it said. The automaker reiterated its 2023 EV launches, including the Chevrolet Silverado EV, Chevrolet Blazer EV, and Chevrolet Equinox EV, were on schedule. GM’s EV sales are still a small fraction of U.S. sales. Out of 1.65 million U.S. vehicles sold in the first nine months of the year, GM sold 22,012 Bolts, 782 Hummer EV pickups, and 36 Lyriq SUVs.

In January this year, the company set $6.6 billion to boost production capabilities. An existing vehicle plant will be extensively modernized and converted to electric cars, and a third cell production facility will also be built in Michigan. Four billion dollars were to be invested in the conversion of the Orion Township assembly plant alone for the production of the Chevrolet Silverado EV, which was presented at the beginning of January, and the upcoming electric GMC Sierra. Orion Township will become GM’s second production facility for electric pickup trucks, alongside Factory Zero in Detroit, from 2024.

By the end of 2025, GM, along with its other plants in North America, aims to have production capacity for a total of more than one million electric vehicles. The other electric car plants include the factory in Spring Hill, Tennessee (Cadillac Lyriq, among others), Ingersoll in Canada, and Ramos Arizpe in Mexico. In addition to the four billion dollars for the conversion of Orion Township, General Motors is investing another 2.6 billion dollars (2.3 billion euros) in Michigan, together with its partner LG Energy Solution, for the third battery cell plant of the Ultium Cells joint venture in Lansing.