How are tech companies helping India battle the Covid-19 crisis?

The recent Covid-19 pandemic has taken its toll on India. With 29,78,709 active coronavirus cases, and a severe lack of medical infrastructure, the country is gasping for breath. There is a shortage of beds, vaccines, oxygen, medicines, and ventilators. People’s lives and businesses have been impacted like never before. In response, several tech companies, such as Facebook, Google, Apple, Microsoft, Twitter, and Amazon have come forward to help India in the face of the deadliest crises the country has faced.

Google recently declared that it planned to establish an $18 million relief fund to help India. The company’s CEO, Sundar Pichai, stated that INR 135 crore would be provided to GiveIndia and UNICEF to distribute medical supplies and organise high-risk communities, and grants would be given to help spread crucial information. 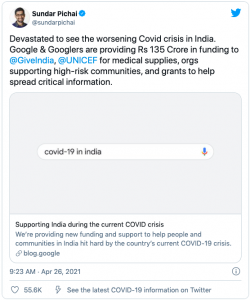 Furthermore, Sanjay Gupta, the country head and Vice President of Google, said that the fund will include two grants from Google.org, Google’s philanthropic department, which would bring the aggregate amount being given to INR 20 crore. The first grant will be given to GiveIndia to provide cash assistance to families that have financially affected by the crisis. The second would be sent to UNICEF to help gather urgent medical supplies, including oxygen concentrators and testing equipment. Google has also initiated a given campaign from its employees, having raised INR 3.7 crore from more than 900 Google employees so far.

Satya Nadella, the CEO of Microsoft, has shown his support by provided oxygen concentrators to medical facilities in India. He confirmed his support through a Tweet, saying that the company would continue to use its influence, resources, and technology to give assistance to relief efforts. Apple has also announced its support for India. CEO Tim Cook said that the company would be supporting grassroots relief efforts for its employees and those fighting against the pandemic.

Facebook’s CEO Mark Zuckerberg announced that the company is working with UNICEF to give $10 million to assist and accelerate any emergency response efforts. In a separate post, Sheryl Sandberg, the COO of Facebook, recounted her early days in India, and mentioned that the company will be supporting those active volunteers and grassroots organisations that are working to stop the spread of the virus. 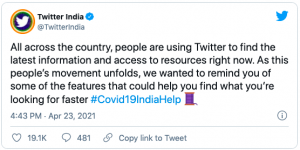 Amazon declared its support for medical infrastructure and increase the capacity of Indian hospitals fighting against Covid-19. The company is collaborating with the Ministry of Health and Medtronic to import 100 ventilators to India, according to Amit Agarwal, country head at Amazon India. Furthermore, in a blog post, the company stated that it is planning to donate blood plasma from patients who have recovered from Covid-19. It has formed a group of dedicated volunteers to coordinate response for those in critical need and scale its support team to help with essential supplies.

LinkedIn said that it has struck a partnership with GiveIndia to raise funds for critical medical supplies, such as protective gears and equipment. Ashutosh Gupta, the Country Manager for India, said that the company is working towards making developments on the platform to disseminate reliable news and information.

Mastercard pledged its support for India by announcing that it will donate INR 75 crore to cover all vaccine-related costs for its employees based in India, as well as their immediate family members. It will also provide 2000 beds and help 2.5 million Indians gain access to healthcare. The company will be reserving some funds for additional shipments of 1000 oxygen generators as part of its CSR effort. Additionally, it is planning to match employee donations to its Employee Assistance Fund, giving up to $15,000 per employee.

According to some reports, Infosys has installed Covid-19 care centres for its employees and their families. These centres can be found in Bangalore and Pune, and are managed by Manipal Hospitals and Ruby Hall Hospital and. In the coming few months, the company will be establishing similar facilities across its offices in the country. Infosys has also decided to help educate children, increase bed capacity in hospitals, and work with the government to spread awareness.

Accenture released a statement that said it would take on the cost of Covid-19 vaccination for all its 200,000 employees and their dependents in India. The programme has already begun and is completely valid for those who have enrolled on its medical benefits plans.

Deloitte announced that it had partnered with more than 40 CEOs of multi-national companies to help India fight the second wave of the pandemic. The team will be focusing on supplying oxygen concentrators, oxygen cylinders and generators, home monitoring kits, and medicines to those in need of such facilities.

Wipro also pledged its support, saying that it would launch a Covid-19 vaccination program for its employees at the Bangalore campus. The company has formed a partnership with Connect and Heal (CNH), a health tech firm that specialises in primary care and urgent response services. Wipro started the vaccination process for its employees at its Electronic City campus last Thursday.