How to emote in Borderlands 3

Borderlands 3 is a Gearbox Software action role-playing first-person shooter video game that was released by 2K Games. It’s the fourth instalment in the main Borderlands series and the sequel to 2012’s Borderlands 2. Borderlands 3 was released on September 13th, 2019 for Microsoft Windows, PlayStation 4, Xbox One, and Apple macOS, and on October 30th, 2019 for Microsoft Windows, PlayStation 4, and Xbox One. On December 17, 2019, a Stadia port was published. The Xbox Series X and Series S, as well as the PlayStation 5, received free upgrades for customers of previous console models on November 10 and 12, 2020, respectively. 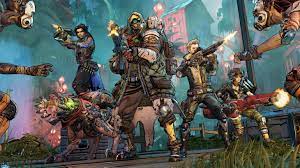 As one of four classes, players perform objectives and side missions in single-player or multiplayer mode. Enemies may drop weapons and stuff that can be equipped when they are slain. As the player gets experience, more skills become available. The narrative revolves around four new Vault Hunters who have been hired by the Crimson Raiders of Pandora to stop twins Troy and Tyreen Calypso and their mad cult followers from seizing the power of the alien Vaults scattered around the cosmos.

Emotes are used in games to show emotion and to point out different objects. If you’ve ever played Borderlands, you’ve undoubtedly seen other players utilise emotes to indicate directions or express overall emotion about the loot they’ve gathered.

Perhaps you were teased after losing a duel, or perhaps you simply spotted one of the emotes and realised you didn’t have it yet. We’re here to break down each emotion and show you where to locate them. Sure, there are a lot of them, but that’s why farming exists. Let’s begin by learning how to emote.

If you’re new to the Borderlands 3 frenzy, emoting is a rather simple process. Simply hold down the options button until the emote wheel displays on the PS4. Users of the Xbox One will need to perform the same thing, but using the menu button. Then, using your control stick, choose the emote you wish to do and select it using the X or A buttons. The Z key is used to control the emote wheel on PC. Simply press the button, and the wheel will rise without the need to hold the button down.

Getting Started With Emotes & Changing Emotes

Players are given four emotes at the start of the game. Cheer, point, laugh, and wave are some of them. These emotes don’t need any actions to unlock, but they’re an excellent way to get gamers used to them. You may go to Sanctuary to modify your emotes after you start collecting more. To choose new emotes, go to the quick-change station and scroll down to emotes. Keep in mind that you may only have four emotes active at any given moment. Because none of the initial emotes are locked, you can alter them all if you like.