How to screen record on an iPhone

If you have either iOS 11 or later, or even an iPadOS, you can create a screen recording and thus, capture sound on your iPhone, iPad, or iPod touch. Here is a guide on how to do so. 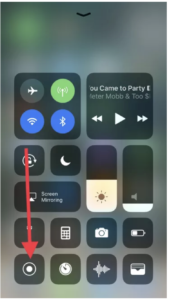 Recording the screen on your iPhone, iPad, or iPod touch

However, you might also want to record some audio along with the video, for which you will have to turn the in-built microphone on.

Prior to starting the recording, press and hold on to the screen record button. Tap on the microphone button on the pop-up screen to turn on the microphone. Following this, tap on the “Start Recording” option. The countdown will start in this window. Touch any place on the screen to exit the screen, and then press the next screen to close the Control Center.

You should keep in mind that after you turn the microphone on, it will stay on the next time you record your screen by default unless you manually go back in and turn it off.

The video will automatically be stored with the rest of your photos and videos in your Photos mobile application.