Windows 11 is almost here, and if you are already a user of Windows 10, it will be free to upgrade to the new Microsoft system. As long as your PC meets all the minimum requirements of Windows 11, you should be able to update to Windows 11 in the same way that you usually update to Windows 10. While there is no exact release date as of yet, Microsoft has stated that it will arrive in early October and somewhere around the holiday season.

The process of updating to Windows 11 is very easy. Once Windows 11 becomes available to all Windows users who have compatible computers later this year, you will have to download it in the same way that you would with any new version of Windows.

For this, navigate to Settings > Update & Security > Windows Update and click on Check for Updates. If it is available for you, you will see Feature update to Windows 11. Click on Download and install the update.

The update aims to bring about various changes to PCs that run on the Windows system. This will include a streamlined new design, along with rounded corners, pastel colours, a new startup sound and an overall look that highly resembles a Mac. 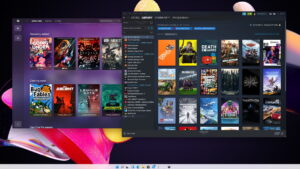 The Windows Start menu has been moved from the bottom left of the screen to the middle, with app icons arranged in the centre beside it. You will also notice several new tools on your desktop which will provide you with at-a-glance information, and offer much easier virtual desktop creation. Furthermore, Android applications will be incorporated into the Windows system and can be installed by users from the Microsoft store.

This update is also the first major change to Microsoft’s operating system since Windows 10 launched all the way back in 2015. Rumours of an update had been circulating since early 2020, with the change eventually being confirmed by Microsoft CEO Satya Nadella at the Microsoft Build developers conference on 25 May.