Jeff Bezos, the world’s wealthiest man, is about to follow the steps of fellow billionaire Richard Branson, and launch himself on a galactic joyride to the edge of space.

He will be flying aboard the New Shepard, a suborbital capsule and rocket system that was built by Blue Origin, Bezos’ space company. But he will not be alone in this inaugural journey, as he has chosen to bring along some guests: his brother, Mark Bezos; Wally Funk, an 82-year-old pilot and one of the “Mercury 13” women, and Oliver Daemen, who has recently graduated from high school and will be the first customer aboard New Shepard to pay for his journey. At the age of 18, he is not only the youngest member of the quartet, but, according to Blue Origin, will also be the youngest person in space. 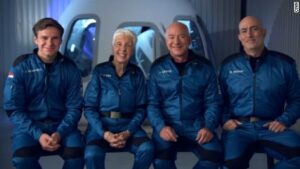 The excursion, which will last approximately 11 minutes all the way from takeoff to landing, will begin from Blue Origin’s facilities at an extremely remote plot of land close to Van Horn, Texas. Van Horn is estimated to be about two hours from El Paso, on Tuesday, July 20 at 8 a.m. CT or 9 a.m. ET, assuming that the weather permits.

Interested viewers will be able to watch the whole event via Blue Origin’s live stream. The live stream will start to roll out at 6:30 a.m. CT/7:30 a.m. ET. You can expect some exterior shots of the rocket and capsule as it flies up toward the cosmos. However, shots of the interior, which will include Bezos’ reactions, will not be made available until after the flight.

CNN Business will also have some reporters on the ground as well as a live blog up and running on Tuesday morning. The blog will also contain a feed of the live stream.

It is also expected that Blue Origin will host a press briefing after the flight with Bezos and the other passengers of New Shepard.