The Indian eCommerce space is still maturing – majority of the consumers, especially the tier 2 and 3 residents, still prefer brick and mortar stores, and are suspicious of online stores. There are multiple news reports suggesting how consumers were duped by marketplace sellers and their suspicion is not unwarranted.

Then there is another class of consumers willing to go the extra mile and order online but are not technically equipped to do so. In collaboration with Statista, UAE based eCommerce company YourLibaas conducted a survey to understand the Indian consumer’s pain points within the ethnic apparel space and tried to understand what are the hurdles they face shopping online. They introduced AI-based chatbots for WhatsApp and Facebook Messenger to facilitate the ordering process as the major pain point turned out to be ‘inability to order online’.

Founded by Khalid Raza Khan and Akram Tariq Khan in 2014, YourLibaas features international designers within the ethnic apparel space. “The Indian designer apparel eCommerce space is vibrant and growing at an herculean pace with an influx of new consumers,” said Akram Tariq Khan, cofounder of YourLibaas.

Akram, who was born and brought up in the middle east, said that similarities within cultures between the middle east and India catalyzed success of UAE’s ethnic fashion within India.

A bootstrapped organization, the company recently raised funding through internal capital infusion. With this, YourLibaas is looking to enhance its product development and expand its operations within the MENA region.

YourLibaas mapped the consumer journey to understand the pain points consumers faced while ordering online. The company claims a 30% increase in purchase conversion rate post introduction of ‘Order of WhatsApp’ functionality. “Our primary audience is non-working women who frequently complained about the checkout process. Our goal was to increase sales from alternative channels following principles of conversational commerce,” said Khalid. 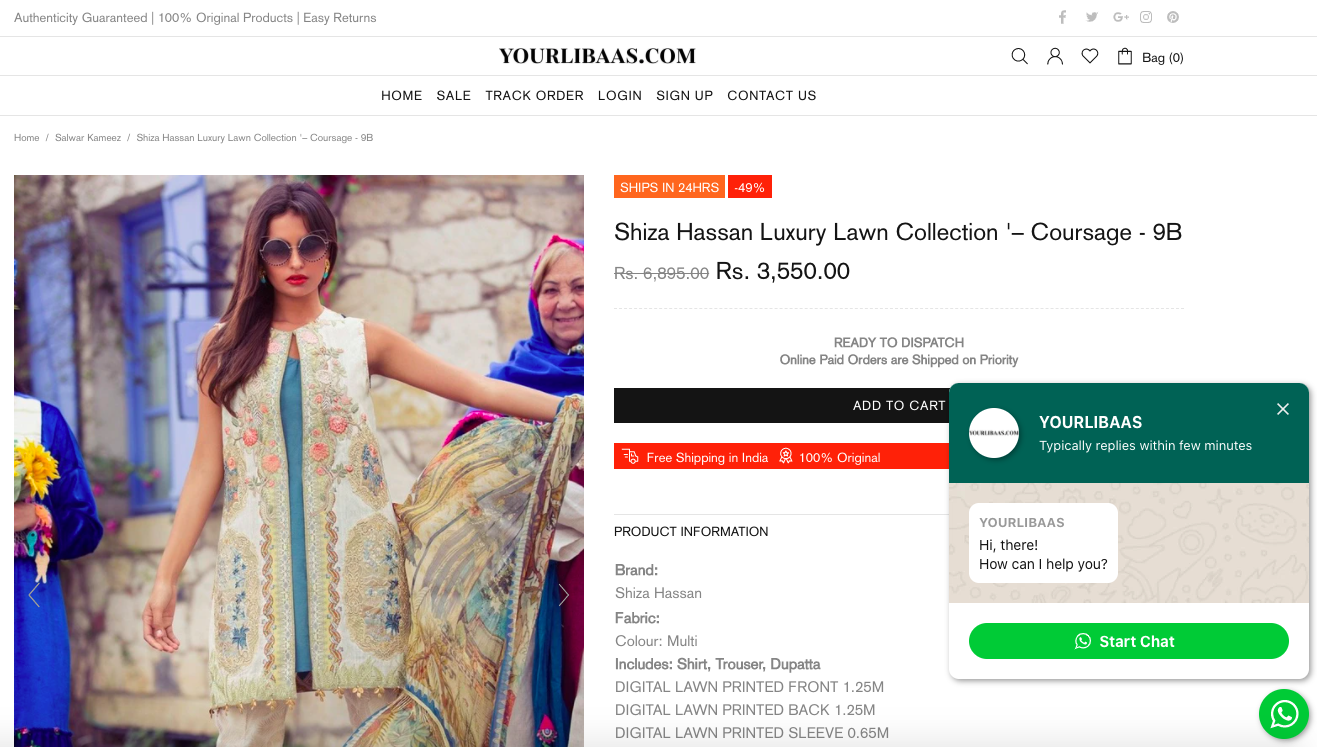 The order widget on the product page

Facebook had introduced WhatsApp Business API in 2018 empanelling a few Indian brands like BookMyShow and Yatra. One has to apply for a WhatsApp business API directly from Facebook or one of its registered business partners. YourLibaas built a NLP-based chatbot which employed image processing to match product images sent by customers to products within the inventory from the backend Shopify API.

With an increasing shift towards mobile devices, the company decided to choose WhatsApp over other channels. “Users found it convenient to get in touch about product queries through WhatsApp and Phone. They would send screenshots of products enquiring about the fabric details, price, delivery timelines and so on. Adding the missing human touch typical of a brick-and- mortar store is a trust building measure,” said Akram.

The company claims that the introduction of conversational commerce features resulted in 2940 orders summing up a total revenue of Rs. 1.65 Cr through the WhatsApp channel over a period of 90 days. Out of a total of 58.8K users that visited the website through WhatsApp broadcast messages during the same period, a significant proportion actually placed orders. The customer numbers were added to the broadcast list post confirmation for opt-in. “We received an average of 260 requests per day for product information and WhatsApp sales increased by 70%.

Prior to it, the WhatsApp sales were primarily driven using the unofficial API integrated with WhatsApp web. This was part of a beta test that was immensely successful. With WhatsApp introducing the ability to pay in-app, we are expecting a sizable increase in revenue from the channel,” the CEO added. 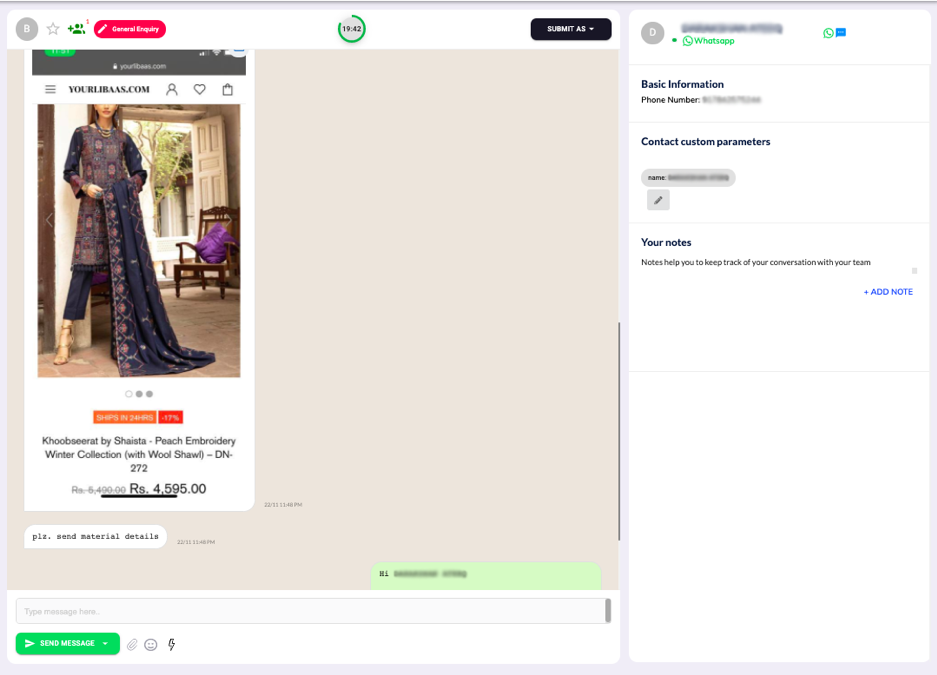 An actual customer seeking product information prior to ordering

Customers send the product details in multiple formats: it could be a product image, a link, an SKU or simply the title. These are recognised by the WhatsApp bot’s algorithm and the software then guides the users to place an order. With the introduction of UPI facility, they are also planning to integrate on-app payments.

YourLibaas claims to have trained the system on chat data from previous customer service transcripts wherein a human customer care executive interacted with customers. Within the new system, there are fallback mechanisms alerting a human executive when the bot is unable to resolve an issue. “We had started off with single-flow chatbots where the number of pre-programmed intents were minimal. It didn’t solve the purpose. With the introduction of AI based NLP, we have increased the first-message resolution rate by 50%,” the cofounder elaborated.

Revenue wise, the company said it follows an inventory based model, however, lately, the team has been planning to shift to a marketplace model serving as a one-stop shop for apparel and accessories. At present, they have a 35% returning customer rate but users have raised concerns of stocks running out during their flash sales on third-party online forums and reviews.

During the current pandemic, we have received reports from multiple eCommerce portals of increase in revenue due to an increase in online shopping. Consumers are becoming comfortable with the idea of buying all sorts of products online. Chatbots and conversational commerce is increasingly being adopted as an important part of the overall ecosystem. According to a Slicktext report, chatbots can help businesses save on customer service costs by answering up to 80% of routine questions.

The company is eyeing a revenue of $6 Mn and looking to grow their workforce by 10x over the next year, Akram told TechStory. It has shifted its focus to the MENA region setting up operations in the UAE which could act as a key enabler.

According to Technopak, the Indian ethnic apparel market is valued at Rs 70,000 crore, out of which the women’s ethnic wear segment has the majority share – close to 85% share and is slated to grow at a CAGR of 10% till 2022.