Hyperloop : Delhi to Mumbai In An Hour !

We live in an age of unbelievable progress in the field of computing, with the internet having revolutionized the way information is exchanged on a global scale. It seems like every day the chips get smaller and the storage space gets larger. One would think such changes would have brought about a new age of Utopian technology. Yet in many areas of life, things don’t seem to have changed all that much over the years and transportation is a woeful example of this. The roads are still lined with cars, the skies speckled with airliners. The science fiction stories of past decade foresaw flying cars and teleporters, but the 21st century has had to settle for Segways.

Dreams never die, however, and the fantasy of futuristic transportation is very much alive right now as exemplified by a concept called the Hyperloop. While it’s not quite as mind-shattering as a teleporter or as fun as a personal jet-pack, the Hyperloop seems like it could revolutionize mass transit, shortening travel times on land and reducing environmental damage in the process.

What is the Hyperloop?

The Hyperloop is a concept proposed by billionaire inventor Elon Musk, CEO of the aerospace firm SpaceX. It is a reaction to the California High-speed Rail system currently under development, a bullet train system that Musk feels is lackluster, as it will be one of the most expensive and slow-moving in the world. 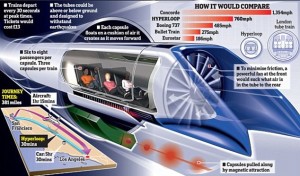 A one way trip between Delhi and Mumbai on the Hyperloop is projected to take about 1 hour and 14 minutes to be precise, while a car takes roughly 23 hours (Image Credits: Dailymail)

Musk’s Hyperloop consists of two massive tubes stretching between Delhi and Mumbai. Pods carrying passengers would travel through the tubes at speeds topping out over 1223.1 km/hr. For propulsion, magnetic accelerators will be planted along the length of the tube, propelling the pods forward.  The tubes would house a low pressure environment, surrounding the pod with a cushion of air that permits the pod to move safely at such high speeds, like a puck gliding over an air hockey table. Given the tight quarters in the tube, pressure buildup in front of the pod could be a problem. The tube needs a system to keep air from building up in this way. Musk’s design recommends an air compressor on the front of the pod that will move air from the front to the tail, keeping it aloft and preventing pressure building up due to air displacement.

Conventional means of transportation (road, water, air, and rail) tend to be expensive, slow, and environmentally harmful. Road travel is particularly problematic, given carbon emissions and the fluctuating price of oil. As the environmental dangers of energy consumption continue to worsen, mass transit will be crucial in the years to come. Rail travel is relatively energy efficient and offers the most environmentally friendly option, but is too slow and expensive to be massively adopted. For distances less than 1500 km, supersonic travel is unfeasible, as most of the journey would be spent ascending and descending (the slowest parts of a flight). Given these issues, the Hyperloop aims to make a cost-effective, high speed transportation system for use at moderate distances. The Hyperloop tubes would have solar panels installed on the roof, allowing for a clean and self-powering system. 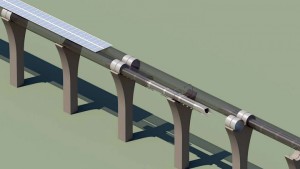 The Hyperloop tubes would have solar panels installed on the roof, allowing for a clean and self-powering system (Image Credits: Digitaltrends) 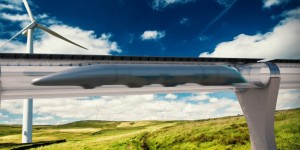 If the Hyperloop becomes operational you could actually stay in one city and work in another (Image Credits: Digitaltrends)

While the contest is sure to attract engineering prodigies, the Hyperloop concept has also garnered interest from businessmen. Startups such as Hyperloop Transportation Technologies and Hyperloop Technologies are working on Hyperloop, and what they lack in clever naming they make up for in ambition. Both companies are building their own test tracks, and HTT has recently announced a partnership with Oerlikon Leybold Vacuum, an engineering firm specializing in vacuum technology, and Aecom, an international corporation providing technical project support. The companies will receive stock options in exchange for their involvement. HTT’s partnership with Oerlikon and Aecom is a massive development. International, publicly traded companies have deemed the Hyperloop concept solid enough to invest in. They also bring with them much-needed experience: Oerlikon has been a leader in vacuum technology since the dawn of the 20th century, while Aecom has been involved in many high profile engineering projects such as the Cape Town Stadium. This partnership represents a tremendous vote of confidence in the Hyperloop, and brings much needed legitimacy to a project that had been, until recently, a pipe dream. 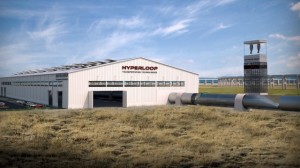 Hyperloop Transportation Technologies has applied for a permit to begin construction of a test track (Image Credits: Dailymail)

On December 7, Hyperloop Technologies announced that it will be conducting a “Propulsion Open Air Test” in the Apex Industrial Park, north of Las Vegas. This step was accomplished with support from Nevada’s government. Hyperloop Technologies intended to begin testing from January 2016. The test represents an important step for Hyperloop Technologies as a company, but also for the Hyperloop as an idea. Government funding and support has historically been crucial to scientific advances, and Nevada’s investment indicates a growing mainstream support for innovation in transportation technology. Also, Hyperloop Transportation Technologies has applied for a permit to begin construction of a test track along the I-5 freeway in Quay Valley, California. Meanwhile, Elon Musk’s SpaceX, progenitor of the Hyperloop idea, has partnered with Aecom to build its own test track in Hawthorne, California. With three test tracks currently in development, the Golden State is at the forefront of Hyperloop development. 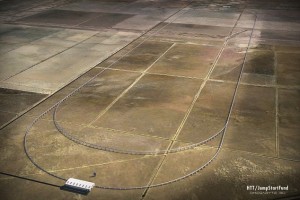 In June, applicants will bring their completed pods and test them on SpaceX’s Hyperloop test track (Image Credits: Dailymail)

On January 30, 2016, the SpaceX Hyperloop design competition concluded. More than 100 prototype pod designs were submitted, and 22 teams have won the chance to test their designs on the SpaceX Hyperloop test track in June 2016. A team of grad students from the Massachusetts Institute of Technology won Best Overall Design. According to the MIT team, the pod is lightweight and emphasizes speed and safety, including a fail-safe brake system. Whereas many Hyperloop designs use air jets to levitate, the MIT design uses two arrays of neodymium magnets to keep the pod aloft. Additional magnets inside the pod will keep it stable as it races along the track. The power of the prototype is impressive, though, it’s still very far from a commercial product given it currently lacks space for passengers or even cargo. The students have until June to tinker with the design, and the next phase of the project could be a great step forward. 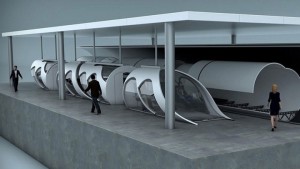 A Hyperloop train will consist of 3 capsules, with 7-8 passengers in each (Image Credits: Dailymail)

Drawbacks and their remedies: There are of course drawbacks. Most notably, moving through a tube at such high speeds precludes large turns or changes in elevation. As a result, the system is optimal for straightforward trips across relatively level terrain. For earthquake prone regions Hyperloop The tubes would be mounted on a series of pylons spread along the route, each pylon placed every 100 feet or so. The pylons will allow for slip due to thermal expansion and earthquakes, ensuring that the tubes will not be broken by any such movement. 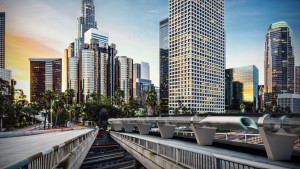 Realistically, the most important problem in getting any project off the ground is money, doubly so when talking about a public work. Even if one can produce an impressive blueprint, there are still issues of public approval, legislation, regulations, and contractors to worry about. Fortunately, The Hyperloop would be a cost-saving measure, especially when measured against the corpulent rail project currently underway. Musk’s white paper for the Hyperloop estimates the total cost could be kept under six billion dollars. Meanwhile, phase one of the California high-speed rail project is expected to cost at least $68 billion. 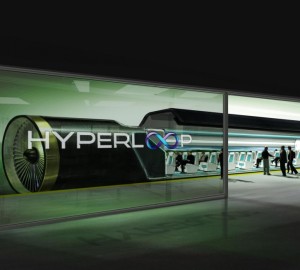 The Hyperloop project has huge potential, if tapped correctly it will be a major change in the transportation sector (Image Credits: Indiatimes)

Conclusion: It remains unclear whether commercial Hyperloop systems will ever be widely adopted. As the global population swells and the environment declines, however, better mass transit systems will become essential. Leonard Bernstein once claimed that great endeavors require two things: “a plan, and not quite enough time.” The plan for the Hyperloop is there, but how much time do we have?