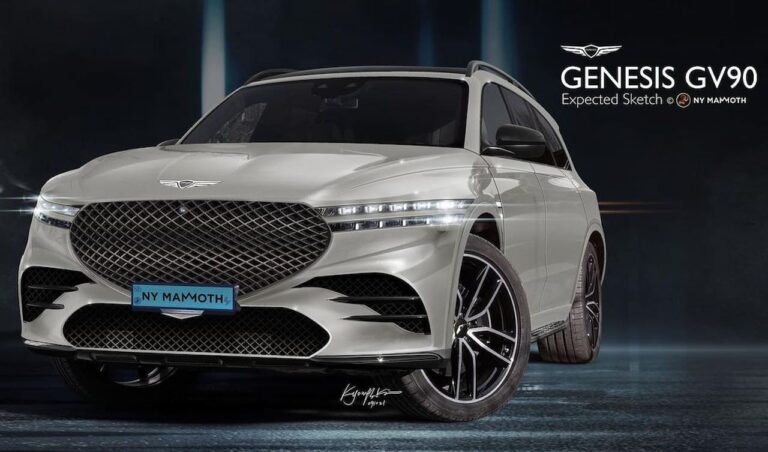 Hyundai Genesis GV90 illustration revealed, to be launched by 2023

Hyundai Genesis GV90 is reportedly expected to be a rival for future Tesla Model X And Rivian R1S. The illustration was first revealed by Korean artist, Gotcha Cars on what the vehicle might look like. It looks like GV90 might be twinned with Hyundai Ioniq 7 and Kia EV9.

Here, the disruption centers on the knowledge that the cars themselves are part of the equation. Almost as important is how customers acquire them and what happens after they’ve done so. Hyundai Motors disavows the conventional retail model and is prioritising customer service above smooth, ­commission-incentivised salesperson patter. Genesis uses the internet and a small network of retail “studios” to reel buyers in, then allocates customers an individual personal assistant, most of whom have been recruited from nonautomotive spheres. Additionally, there’s a five-year warranty, servicing, and roadside assistance package. Also, the car is collected and returned on covered transport.

Genesis GV90  will most likely be based on an extended version of the E-GMP platform. This would enable a range of up to 300 miles, meanwhile, a 10-80% charge would take less than 30 minutes. Whilst electric crossovers are becoming more and more prevalent, when it comes to full-sized electric SUVs your options remain somewhat restricted. Therefore Genesis would certainly get ahead of the luxury competition by launching the GV90 within the next two years.

Currently, its only rivals would be the Rivian R1S and Tesla Model X – with the latter not even considered a full-sized SUV by some. Others may also consider the BMW iX, Audi e-Tron, and upcoming GMC Hummer SUV as full-sized, but it’s important to note none have third-row seating.

GQ has driven all four of the first in a product wave that will soon also include a smaller hatchback and a pure-electric saloon. The G80 and GV80 are big saloons and SUVs respectively. The smaller G70 and GV70 are less distinctive but still deliver the attributes that characterize Genesis: mindfulness. The GV70 makes a potent case for itself against the Audi, BMW, Jaguar, Lexus, and Mercedes compact SUV competition: there is a road-scanning adaptive suspension, a fabulous 14.5-inch infotainment screen, a bewildering array of safety tech, and class-leading build quality. The 2.5-liter petrol engine makes 300bhp and gets along the road sweetly enough, but one can almost sense their Genesis personal assistant gently suggesting that they slow down. Once the production model is out, a detailed analysis can be done.