According to a source intimately involved in the transaction, Byju’s paid Blackstone Inc. $234 million to settle its debts owed to the private equity firm as part of a $950 million deal to purchase Aakash Educational.

The payment made on Thursday was for a 38% or so stake in the learning centre network that Byju’s acquired in April 2021 that was controlled by Blackstone.
According to the source, Byju’s paid all of Aakash’s owners throughout the closing process with the exception of Blackstone because the PE company had agreed to deferred payment. 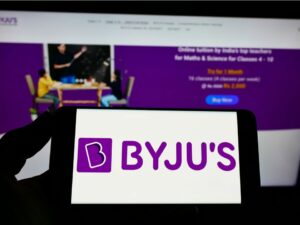 An inquiry for comment was not immediately answered by Blackstone.

The payment of debts coincides with the popular edu-tech firm in India, which was recently valued at $22 billion, suffering sharply increasing losses.

backed by Tiger Global For the fiscal year that ended in March 2021, Byju’s losses grew significantly to 45.64 billion rupees ($574.06 million), while its revenue decreased by 3%.

The pandemic-induced spike in demand for online education benefited the company greatly, and it attracted investments from some of the top venture capital funds and financiers, including Sequoia Capital and Mark Zuckerberg’s Chan-Zuckerberg Initiative, to finance its astronomical rate of expansion.

In the fiscal year that concluded in March 2022, Byju’s—one of the emblems of India’s startup success—spent a combined $2.5 billion to purchase businesses including Aakash, a kids’ coding platform based in the United States, and Epic.