According to a Lok Sabha bulletin published on Tuesday, the Cryptocurrency & Regulation of Official Digital Currency Bill, 2021, will provide for specific exclusions to promote the underlying technology of cryptocurrency and its goals. 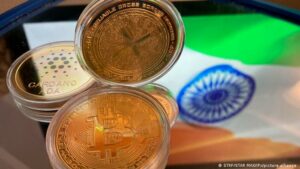 The government intends to draught legislation outlawing private cryptocurrencies and build a framework for an official digital currency to be issued by the Reserve Bank of India during Parliament’s Winter Session, which begins on November 29. (RBI).

The Cryptocurrencies & Regulation of Official Digital Currency Bill, 2021, will provide for particular exclusions to promote the underlying technology of cryptocurrency and its purposes, according to a Lok Sabha bulletin published on Tuesday.

In July, the RBI announced that it was developing its digital currency, the Central Bank Digital Currency (CBDC). “A CBDC is a digital form of legal money issued by a central bank. It functions in the same way as fiat money and can be exchanged for fiat money in a one-to-one ratio.

India, which has experienced a surge in investor interest in cryptocurrency and many investors already have, continues to warn residents against investing in cryptocurrencies, citing severe financial risks as a reason.

Prime Minister Narendra Modi presided over a conference earlier this month to examine the future of cryptocurrencies and warned against Bitcoin slipping into the wrong hands.

The Centre has also stated that it intends to make new modifications to income tax regulations in order to bring cryptocurrency earnings under the tax net and that it will do so during the Union Budget next year.

The Reserve Bank of India has stated on several occasions that cryptocurrencies such as Bitcoin, Ethereum, and Dogecoin, among others, pose a risk to financial stability. It has also questioned its claims of market value, urging investors not to be lured by the promises of cryptocurrencies’ returns.

However, in March of this year, the Supreme Court struck down an RBI circular forbidding banks and businesses regulated by it from providing services related to virtual currencies, which was issued on April 6, 2018.

The Crypto bill is one of 26 laws the government intends to submit in the upcoming winter session. Last year, the government planned to outlaw all cryptocurrencies, and a measure was even planned to be introduced at this year’s Budget.

The bill was eventually dropped, and a committee was formed to further debate the issue with stakeholders. Since then, it has hinted that cryptocurrencies and the Indian rupee can coexist, but that they may be regulated. The bill it intends to introduce says differently.

Also read: The IMF warns El Salvador not to use Bitcoin as legal tender