Indian Origin, American Mr. Nand Mulchandani has been appointed as the inaugural chief technical officer of the Central Intelligence Agency, the organisation announced.

The Central Intelligence Agency is a government intelligence organisation that works right under the American federal government. The organisation works on collecting, analysing, and studying the data they collect within the country and from around the world and make their decisions accordingly if they feel there is a security, or data threat. The organization even works closely with government officials, policy makers, and even the president to inform them of the ongoings in the country and across the nation and help them form policies and assist them in making the most informed decisions.

Mr. Nand Mulchandani has close 3 decades worth of experience toiling in the heart of the Silicon Valley. He has also worked at the Department of Defence Joint Intelligence Centre. He is also a very successful entrepreneur and has helped many businesses from the ground up working with them at their initial phase to get them up and running. 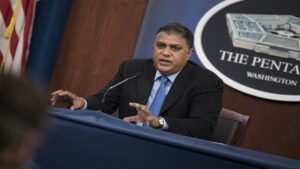 He also has loads of knowledge and experience in security-based software and artificial intelligence as he played a paramount role in revolutionizing the Department of Defence by making them adopt the most updated and secure artificial intelligence, other electronics, devices and state of the art technologies.

A Master’s graduate of the esteemed Harvard University, he went to get his second master’s at Stanford University. Prior to that, he was one of the top students at his undergraduate studies at Cornell University.

As the first ever chief technical officer, Mr. Nand Mulchandani’s responsibility is to make sure that the organization is making good use of state-of-the-art technology, and making sure, that there is constant innovation with their products and innovation. He will also be looking at new possibilities and areas that the organisation can delve into.

The director of the organisation, Mr. William Burns spoke very highly of Mr. Nand Mulchandani and said that there is no person better suited to take the helm of this new and important role that has been long overdue. He also said that this new position will be very important to make the organization more efficient financially and technologically.

Mr. Mulchandani also spoke about his new role filled with pride. A man of his qualities, skill set and qualifications is set to take the new role by storm and revolutionize the entire organization from up to down.