Robots are being utilized in all walks of development. They are mostly deemed useful to tackle tasks that are too dangerous and hazardous for humans. As the technology advances, there have been more and more inclusion of robots in various fields for various purposes. It might be to assist in a task or to perform it.

With the Corona pandemic on the rise. Economies have been suffering and the healthcare industry has been trying its best to meet the rising demands for the services. But the main issue arises when a doctor is required to diagnose a patient. A lot of health workers are putting their life in danger in order to do their duty. As a result of which there have been major losses.

In order to tackle this problem many hospitals and companies are now turning towards robotics. Invento Robotics, a Bangalore based company is one such enterprise that has been developing robots to assist in dealing with the Corona situation.

They have developed three robots to carry out various tasks such as disinfecting the surfaces, answering the patient’s questions and also allowing the patients to have video consultations with the doctor.

The company Invento Robotics was founded in the year 2016 by Balaji Vishwanathan, Mahalakshmi Radhakrushnan and Barath Kumar. This start up assists to automate customer engagement process in the banks, airports and restaurants and other places. 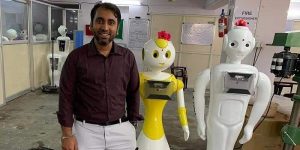 Their most popular robot is named ‘Mitra’, which means a friend in Hindi. This robot costs around $10,000. This robot is equipped with face recognition technology. It can interact with the patients by recalling their faces and names based on stored past data. Along with that this robot can scan the temperature of the patient, collect their phone number and a picture. It can also set up a video call with a doctor with the help of a screen attached on its chest.

Balaji Vishwanathan, the CEO of Invento Robotics while explaining Mithra’s functions said, “This robot takes pictures of visitors and records their body temperature. It asks them for details such as name and phone number, and validates their identity. It provides these details to the organisation the person is visiting. If the visitor fails the screening test, the robot immediately connects the visitor with telemedicine support. Doctors can talk to them directly through the robot and advice accordingly.”

RoboDoc, another robot developed by the Invento Robotics was made in order to reduce the corona virus contraction risk to the doctors. This robot is capable to move around the hospital independently and can provide the doctors with a virtual access of the covid wards.

RoboDoc is specifically designed to serve and assist in the healthcare sector. It is capable of scanning the body temperature and other vital information of the patient. This data is collected and fed to the computer. This robot is also capable of carrying weight up till two kilograms.

Balaji Vishwanathan, the CEO of Invento Robotics while speaking to CNN business said, “Mitra can be the nurse’s or doctor’s assistant, take readings and vitals, remind them of medications. It may sound ironic but we are using robots to bring humanity to hospitals.”

The two robots C-Astra and Mitra are also capable of serving in various sectors such as shopping malls, metros and warehouses.