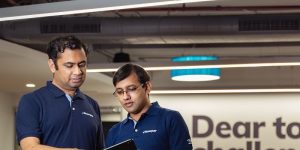 Razorpay, a six-year-old Bangalore-based fintech company became the first Y Combinator-backed Indian startup to reach the much-coveted and sought-after unicorn status by topping a $1 billion valuation last year. The startup has tripled its valuation just after six months and is all set for the launch in Southeast Asian markets.

The existing investors, GIC, and Sequoia Capital India co-lead the new round. Ribbit Capital and Tiger Global were the other investors who took part in the round, taking Razorpay’s to-date raise to $366.5 million.

Razorpay has grown to become the market leader, especially with global giants like Stripe still out of the Indian picture. And now, it plans to extend its successful reign to the Southeast Asian Markets.

According to Harshil Mathur, co-founder and chief executive of Razorpay,

He also added that the new round opens more opportunities to explore diverse M&A opportunities which will be of remarkable help in accelerating growth.

The founders of Razorpay, Mathur and Shashank Kumar, met during college days at IIT Roorkee. Their idea took root after realizing the predicaments faced by small businesses in accepting money digitally. The problem was aggravated due to the fact that existing payments processing firms weren’t exactly designed to fit the needs and requirements of small businesses. A solution to this problem was the leading goal of Razorpay. Though initially, they faced challenges particularly in convincing the investors about their idea, now the picture has changed for the better.

Now the stories related to Razorpay have taken a dramatic turn, with businesses recalling how they were helped by Razorpay in the initial stages.

According to a statement by Mathur last year, it can be ascertained that Razorpay’s core business processing payments are on the path of fast growth and progress. The startup will now focus on building two new offerings.

The announcement concerning the funding comes in the context of Indian startups raising large amounts of capital at an accelerated pace, with investors making promising bets on the world’s second-largest internet market.