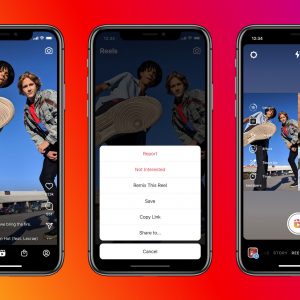 Instagram has always taken the lead at expanding boundaries between users, making it one of the most widely used app. They have been noted to always come up with new and exciting features that attract both the younger and older generation into it. Instagram has grown in such a way that it has evolved into something more than just a social media platform. It has turned into a platform where several issues are addressed, trends are created and awareness is spread. To be precise, it has evolved into a lifestyle for many of its users. Therefore every new feature or addition into Instagram has always sparked a great deal of excitement, and the latest one among them is ” REMIX”.

Instagram has officially launched its new feature Remix for reels. This is similar to the highly popular ‘Duets’ option found in TikTok. Remix allows the creators to add their own content to the favored reels clips, that is, users can now pair videos with other user’s reels. The duets feature in TikTok had a high user response until its ban last year and doubts remain as to the potential of  ‘remix’ and if it would receive the same response ‘duets’ had.  This feature will be enabled by default for any new reel and people wishing to apply this feature on their older reels will have to manually enable it.

STEPS TO ENABLE AND USE THIS FEATURE

First, choose the required reel and tap the three-dot menu found at the bottom of the screen. Select the “remix this reel” option and immediately your screen will be split into two. On one side is the original reel and on the other is where your recording is to be done. You can also upload an existing video instead. Once recorded you can edit the volume levels by tapping on the slider icon and tapping on the microphone icon helps you make voiceovers. You can also add effects, timer and adjust the speed.

You can also disable the remix option by opening settings, select Privacy, and then reels. Upon selecting reels the enable remixing or disable remixing option appears and the desired changes can be made there.

Instagram was also rumored to have approached several TikTok stars, offering them new contracts to produce new content exclusively on its platform. This move by Instagram is expected to be a part of its plan to monetize reels and also to promote brand marketing in it. Monetizing Reels is expected to bring forth a large number of users ready to put in time and effort.

Duets by TikTok was popular for inspiring creators with new and entertaining ideas and Remix by Instagram is also expected to do the same.