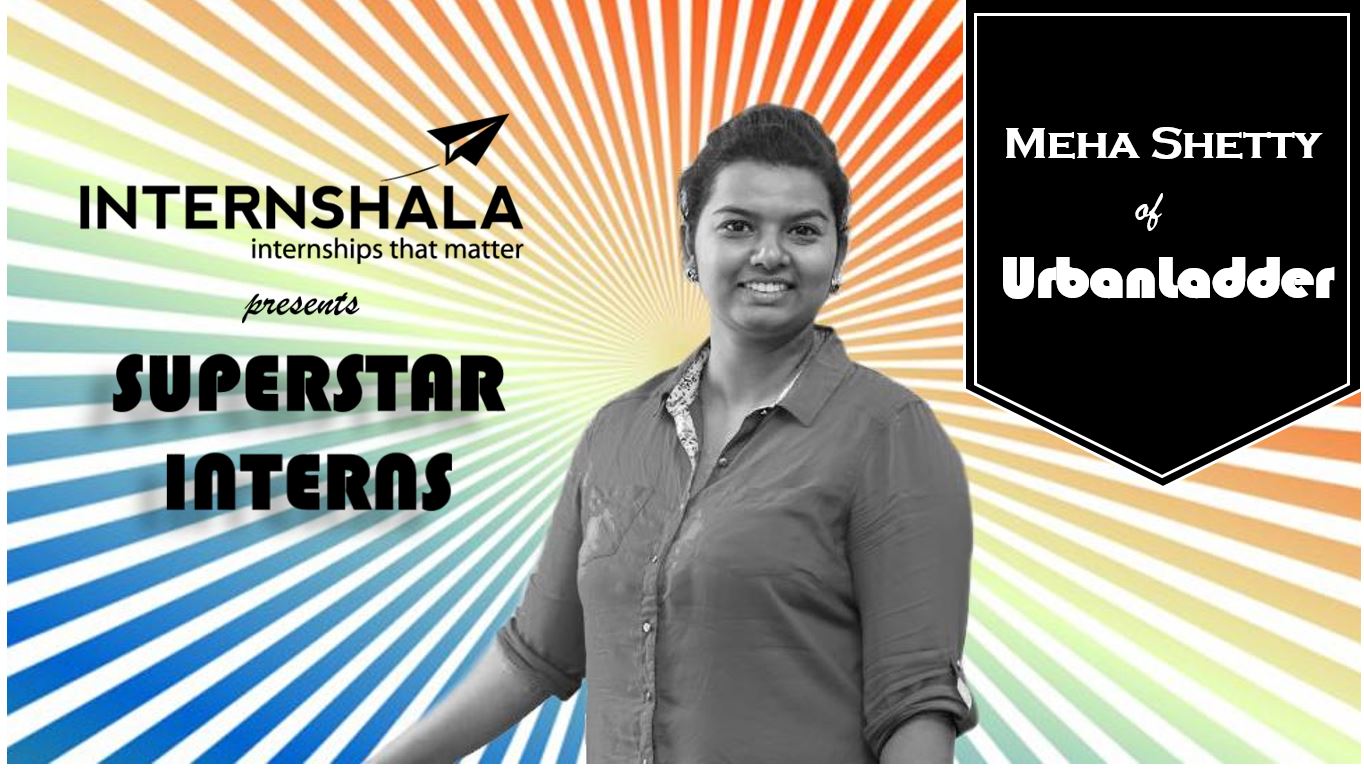 Interns – the reason why many startups have succeeded and survived in India today. Interns bring a lot of passion to learn, deliver, grow, and allow every startup to remain extremely agile and cost effective. As a tribute to the contribution of interns to startup ecosystem, Techstory along with Internshala is bringing to you a series focused on Superstar Interns – stories of interns who have played a significant role in the success of the companies.  Today, we present the story of Meha Shetty, the superstar intern at Urban Ladder.

As a furniture designer, Meha always admired the well-designed products on Urbanladder website and always wanted to be associated with a brand that had such high aesthetic standards. So when she started working for Urban Ladder in March 2014, right after college, it was a dream job for her.

“It was my first Industry experience. I was really excited and scared at the same time. I had heard people saying that life changes when you start working and how “college is the last time when you can have fun”. But honestly, Urban Ladder was the perfect transition one could get from college life to work life!” reminisces Meha.

On recollecting her first experience, she adds, “I entered a small cozy office, and had the opportunity to work with a bunch of young, energetic and extremenly creative people. The best part was, there was work being done and everyone had fun at the same time. The values that the company followed was imbibed in each every employee(then 60), which was truly amazing. I didn’t miss college much and realized Urban Ladder was the place to be.”

Speaking of Meha’s impact in the organisation’s growth, Pradeep James, Head Design and Development, states “Meha is an extremely meticulous person, committed to excellence. Her dedication to see a project through is a key contribution to her successful career. She possesses an array of skill sets relevant to her role. User research and user understanding being one of her biggest strengths, she is able to understand the intricate details of the furniture manufacturing process and carefully incorporates this into her design process. Meha’s hard work dedication and passion for her job, makes Meha an asset to the design team at Urban Ladder.”

Interns bring a lot of passion to learn, deliver, grow and at the same time allow the startup to be extremely agile and productive. “In addition to being a pipeline for hiring, interns fill positions and assist employers with innovative ideas and challenges. Internships allow us as a company to connect with and build relationships with students early in their academic careers. This builds a pool of candidates who have work experience with us and who have built relationships with our managers” adds Geetika Metha, VP, Human Resources.

In her current role, Meha is responsible for the products that she designs from its idea phase till the end product. Once they arrive at a use-case gap which needs a product design, she does her research with the users and designs the product from the information analysed. The products that are being designed go though a process of validation with the consumers and then the prototype making takes place. Once the prototype is finalized as per her design, it is ready to be launched on the site.

One of the most exciting part for Meha is the culture and creative freedom experienced at Urban Ladder. She adds, “It was like working on a project in college. I had heard that most companies, don’t give value to design and just ask you to come up with product designs as fast as possible! But at Urban Ladder, it was not like that. I was given enough time to do proper research and follow my design process and come up with well though designs. The organisation understands the value of design and has a great designing team delivering beautiful products with the perfect form, function and quality.”

Urban Ladder not only helped her in growing professionally, but also helped her in growing personally. She always had a problem in presenting her ideas to people and was lacking confidence in explaining her design to a group of people. But the amazing managers that she had the opportunity to work with, helped her in overcoming her limitations. They pushed her to converse more and always brought her opinion into her consideration during decision making.

“I think as an intern you’re very fresh in your head and don’t come with pre-conceived notions about business and design. You tend to take up challenging work and don’t give up very easily. We make mistakes and try and experiment to arrive at the best possible solution.

The organization has taught me a lot of things, from how to speak and present your thoughts, to how to work in a team. Also it has taught me how a business runs and how work gets done in a macro level so that everything is streamlined. It had also taught me that culture and values that a company believes in, can be translated to its employees even if they scale up from 30 to 300!” she exclaims.

She has already witnessed Urban Ladder grow 4 fold since the time she joined and is confident that in the next 5 years, the company will be the only trusted brand for any Home solution need in India. She is proud to tell people that she designs products for Urban Ladder and on her personal goal for the next 5 years, she says, “I would like to take up larger responsibilities and would like to manage a team of designers and established a fully functional design research and development unit complete with rapid prototyping center and a mini workshop for quick prototyping, at Urban Ladder”

She credits Raymond Loew, often referred to as “father of industrial design”, as her role model. She adds, “he made products irresistible at a time when nobody really wanted to pay for anything. He coined the acronym MAYA, that stands for “Most Advanced Yet Acceptable’. He believed that, “The adult public’s taste is not necessarily ready to accept the logical solutions to their requirements if the solution implies too vast a departure from what they have been conditioned into accepting as the norm.” Its a great thought that is very valuable for a designer.”