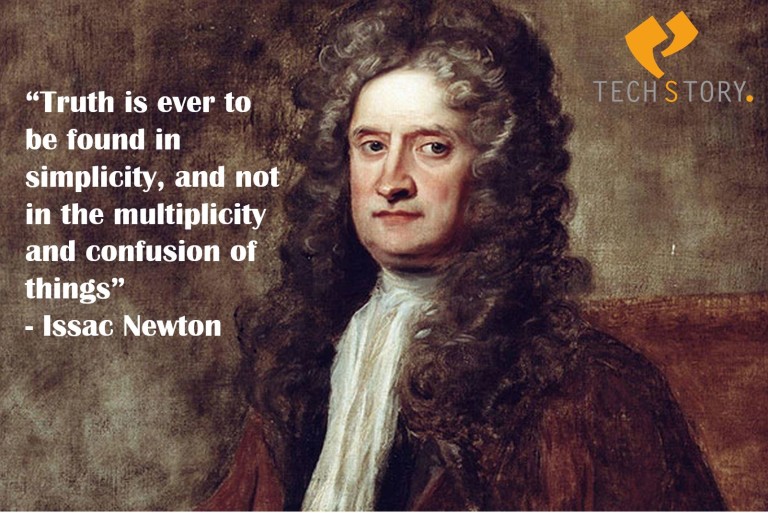 Interesting Facts About Issac Newton – The Genius Who Explained Gravity !

Born on January 4, 1643, in England, Isaac Newton was a brilliant physicist and mathematician, and is credited as one of the greatest minds of the 17th century who revolutionised science.

In this article, Techstory brings to you various phases of life of Sir ISSAC NEWTON and his contributions to mankind !

Isaac Newton was born in the hamlet of Woolsthorpe and was the only child to a rich farmer. Unfortunately, he lost his father before he was even born and then got separated from his mother at the age of three after she remarried. This had a deep emotional impact on little Newton which made him obsessive and insecure. He was raised by his maternal grandmother until he reunited with his mother at 12.

As a child, Newton was fascinated by chemistry. His mother wanted him to be a farmer but farming bored him and he miserably failed at it. He completed his basic education from King’s School in Grantham. Newton enrolled in a program in the Trinity College, University of Cambridge in 1661 after receiving recommendations from his uncle who realized his potential then. Newton waited on tables and took care of wealthier students’ rooms for pocket money. He spent all his spare time reading from the modern philosophers. Though Newton graduated (in 1665) without any distinctions, his efforts won him the title of scholar and four years of financial support for future education. In 1665, the University closed down due to a plague epidemic and so Newton had to return to home to pursue his private study.

However, against all the odds, Newton’s quest to discover and explore science never diminished. The force was with him and it was during this 18-month break that he conceived the method of infinitesimal calculus, optics and gravitation. As the legend says, Newton discovered his famous inspiration of gravity with the falling apple on his head. In 1666, Newton observed that the spectrum of colours exiting a prism and concluded that colour is a property intrinsic to light.

Thereafter, Newton received his MA and became a Fellow of the “College of the Holy and Undivided Trinity” in 1667. He was appointed Lucasian Professor of Mathematics in 1669 on Barrow’s recommendation.

Again In 1679, Newton returned to his work on mechanics and gravitation and he published Principia on 5th July, 1687 where he defined the three laws of motion and the law of universal gravitation- which is considered to be the single most influential book on physics and possibly all of science.

Not only science but the mysteries and enigmas existing around intrigued Newton. He isolated himself and studied alchemy and tried to create the Philosopher’s Stone- a legendary substance capable of turning metal like Mercury into gold. Speculative fiction author Fritz Leiber said of Newton, “Everyone knows Newton as a great scientist. Few remember that he spent half his life muddling with alchemy, looking for the philosopher’s stone. That was the pebble by the seashore he really wanted to find”.

In the 1690s, Newton wrote a number of religious tracts dealing with the literal and symbolic interpretation of the Bible. Newton was a Member of Parliament of England and he became the Master of the Mint  in 1699, a position Newton held for the last 30 years of his life.

An obsessive leader, driven by power and reputation, Newton was elected as president of the Royal Society in 1703.

It is known that he never married or made many friends, and in his later years due to nervous breakdowns and egoistic approach, his only few friends expressed their worry about his mental stability.

The month was March and year 1727 when Newton experienced severe pain in his abdomen and blacked. On March 31, 1727, at the age of 84, Newton took his last breath.

Newton, during his course of life, inspired and influenced many minds of the earth. English poet Alexander Pope was moved by Newton’s accomplishments to write the famous epitaph:

God said “Let Newton be” and all was light.

Some of the work published by Newton in his lifetime