As William Shatner went to space on 13th October, fiction came to reality when Shatner went to space and returned safely on Blue Origin’s Shepard. Jeff Bezos was in the location when the crew landed, and Shatner was at an emotional stage. Then Bezos cut off Shatner by a champagne spray. While it may have seemed like Bezos was trying to remove the awkward feeling, some fans are hit out on Bezos for that interruption. 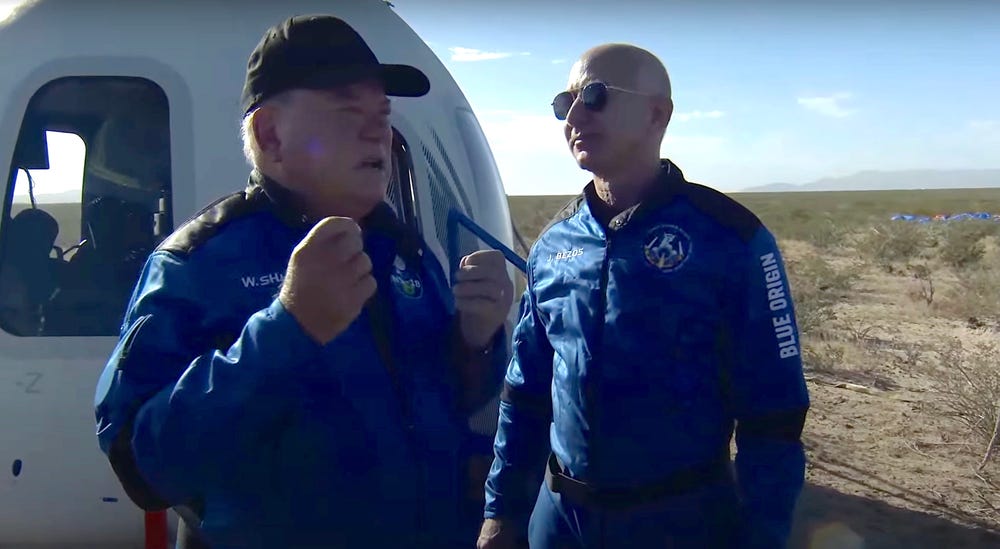 The Star Trek star was overwhelmed with emotions as he went to space. He said, “What you have given me is the most profound experience. I’m so filled with emotion about what just happened. It’s extraordinary, extraordinary. It’s so much larger than me and life. It hasn’t got anything to do with the little green men and the blue orb. It has to do with the enormity and the quickness and the suddenness of life and death.”

He further added, “I hope I never recover from this. I hope I can retain what I feel now. I don’t want to lose it.” After which Bezos interrupted the speech and said “Give me the champagne bottle”. Which eventually led to spraying champagne all over. After Bezos cut off, Shatner turned back and left from there.

One fan stated, “Jeff can’t be outdone! It’s all about him.” Interesting that when Jeff Bezos went to space the first time, he too shared an Instagram post stating his emotional connection with space. While it may not be exactly the same for everyone else, but the moment is special.

Jeff can’t be outdone! It’s all about him

While another Twitter user shared that Bezos became an uncaring tool. It is also possible that they are on some time limit, regardless it seems much more than that. The way how Shatner was expressing was incredibly moving to all Star Trek fans. He is Captain Kirk and he also agreed to feel scared to go to space.

Shatner was moving. Bezos came off as an awkward, uncaring tool.

This year, as many crewed flights went to space with civilians, there were various people who went. From as young as a teenager to people older than 60 years old went to space. Blue Origin’s last spaceflight with Jeff Bezos had an 82-year-old Wally Funk. Where Funk’s lifelong dream of going to space was fulfilled. The trip barely lasts 15 minutes, it is the experience that mattered in all these civilian spaceflights. Unlike SpaceX civilian spaceflight, the ones Blue Origin is sending are about sending the capsule to the Karman line and then coming back to earth within some time.