Jamie Dimon is the CEO of JPMorgan Chase, one of the world’s largest financial organisations. He has reiterated his position on bitcoin and cryptocurrencies. According to Dimon, anyone who borrowed money to purchase bitcoin was a “stupid.” However, his personal viewpoint does not conflict with JPMorgan’s decision to provide consumers with access to six cryptocurrency funds, as well as the creation of JPM Coin, a digital ledger token for payments. 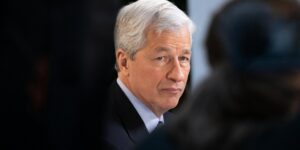 Cryptocurrencies are being slammed by Jamie Dimon.

Jamie Dimon, the CEO of JPMorgan, slammed crypto and bitcoin once more. In an interview with the Times of India last week, the JPMorgan executive debated the true value of cryptocurrencies and his perspective on the industry. According to Dimon, the recent bull market in cryptocurrencies was fuel by a large amount of liquidity in the system, which led to speculation. Dimon stated:

I am not a bitcoin buyer. If you borrow money to buy bitcoin, I believe you are a fool. However, Dimon recognised that the bitcoin market may see a tenfold increase in value over the following few years.

Dimon was also questioned about how he thinks future legislation will influence cryptocurrencies. Dimon emphasised that bitcoin was not the company’s primary focus. However, he did say that he believes governments will regulate bitcoin at some point in the future. He elaborated:

However, Dimon’s personal views on bitcoin’s validity and the imminent regulation of the cryptocurrency industry have had no impact on JPMorgan’s business movements into crypto. In fact, compared to two or three years ago, the company is now more open to cryptocurrency. Grayscale’s Bitcoin Trust, Bitcoin Cash Trust, Ethereum Trust, and Ethereum Classic Trust, as well as Osprey Bitcoin Trust, announced in August that they would allow their customers to invest in six cryptocurrency-based investments funds.

In addition, the corporation has dabbled in the world of digital currencies. JPMorgan announced the launch of “JPM Coin” in October 2020, a blockchain-based network that will allow its clients to make rapid payments.