A 600-year-old Bohemian aristocratic family is embracing the latest crypto and art frenzy in the hopes of using NFTs to fund the restoration of its artwork collection and ancestral castle. The Lobkowicz family of the Czech Republic, which once sponsored Beethoven, lost everything to the Nazis and Communists, and then reclaimed their castles and artwork in the 1990s after communism fell, will auction a slew of non-fungible tokens and host a conference next month in Prague at the Lobkowicz Palace, which boasts a 360-degree view of the city.

“We don’t get any government money,” William Rudolf Lobkowicz, a 27-year-old prince born in Boston but raised in the Czech Republic, said. “My father jokes that we are the world’s richest poor people. We’ll show you a few artefacts that are in severe need of restoration.” 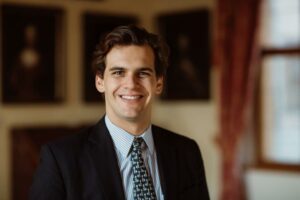 The family reclaimed their castles and a collection of 20,000 antiquities in the 1990s, including pieces by Bruegel, Canaletto, and Velázquez, as well as hand-annotated Mozart and Beethoven manuscripts. The items cannot be sold or exported without the authorization of the government since they are deemed national cultural treasures. As a result, the Lobkowicz family has primarily funded the collection’s upkeep through tourism and events. The collection attracts around 100,000 visitors each year.

However, the epidemic put a stop to all of that. Lobkowicz instead piqued interest by hosting free activities, such as digital tours of the collection every Sunday, which drew roughly 130,000 visitors in a year. He set up virtual yoga sessions in some of the castle’s historic locations.

Now he’s experimenting with NFTs, which have exploded in popularity in the last year. According to tracker NonFungible, daily NFT sales peaked at $268 million in late August.

Lobkowicz, who is the director of digital media and innovation, says they are attempting to generate interest and remain relevant by experimenting with a new style of funding. In an interview, he stated, “That’s how we’re going to stay around for another 600 years.” “

Non-Fungible Castle, a one-day invitation-only seminar, will begin things off. It costs 400 euros to attend — payable in crypto, of course — and will cover topics such as whether the NFT frenzy is a hoax. “NFTs: Nothing F**king There?” and “What Are You Really Buying?” are two of the scheduled panel talks.

People will also be able to buy blockchain-based proofs. That they assisted in the restoration of specific artefacts in the private collection. NFTs will be sold by a number of artists, with half of the proceeds going to restoration.

More about Lobkowicz’s fascination with bitcoin

Lobkowicz began experimenting in Bitcoin, Ethereum, and Litecoin while studying history at Harvard University. He’s also bought four NFTs — not the most costly, he claims — and invested in the cryptocurrency Cardano since then. He lives in an apartment and commutes to work by tram every day. He also rose through the ranks of the family’s business, initially selling ice cream, cleaning, and even providing castle tours.

Lobkowicz says he wants the collection to generate the same type of long-term interest as CryptoPunks. Which are digital avatars that have traded for millions of dollars.