Kavach, the Indian technology that can prevent two trains from colliding

Everything went according to plan. On the same track, the locomotives carrying Railway Minister Ashwini Vaishnaw and Railway Board Chairman VK Tripathi raced towards one other, but an automatic system applied brakes 200 metres apart, preventing a collision. According to Budget plans, Kavach, an indigenously created Automatic Train Protection System that was shown on the South Central Railway on Friday, will be rolled out aggressively on 2,000 km in 2022-23. 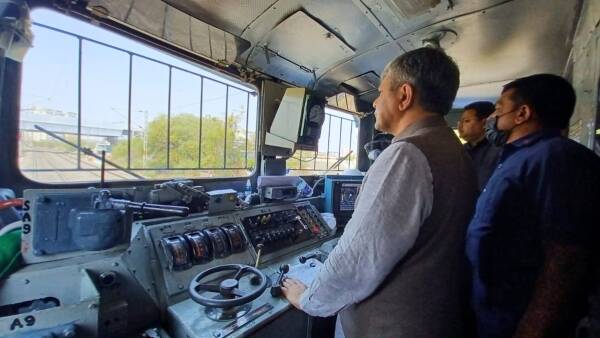 It is India’s own automatic protection system, which has been under development since 2012 under the name Train Collision Avoidance System (TCAS) and has now been renamed Kavach, which means “armour.”

Simply put, it is a system of electronic devices and Radio Frequency Identification devices installed in locomotives, signalling systems, and railroad tracks that communicate with one another using ultra high radio frequencies to control train brakes and alert drivers, all based on logic programmed into them.

One of its advantages is that it may send out triggers when a loco pilot jumps a signal, known as Signal Passed at Danger (SPAD), which is a serious safety violation in railway operations and the cause of mishaps like collisions. The gadgets also continuously broadcast signals to the locomotive, which is beneficial to loco pilots in low visibility, particularly during dense fog.

TCAS, also known as Kavach, combines critical aspects from existing, well-proven systems such as the European Train Protection and Warning System and the indigenous Anti Collision Device. In the future, it will include capabilities from the high-tech European Train Control System Level-2. The current version of Kavach corresponds to the Safety Integrity Level 4 standard, which is the maximum level of safety and reliability.

India now aims to market Kavach as an exportable system, a less expensive alternative to the European systems that are popular around the world. While Kavach now employs Ultra High Frequency (UHF), work is underway to make it compatible with 4G Long Term Evolution (LTE) technology and to commercialise the product globally. Work is underway to make the system interoperable with other systems already in use around the world. The system is being developed by the Lucknow-based Research Designs and Standards Organisation (RDSO) in collaboration with private manufacturers. India wants more private companies to participate in the research and manufacture of subseauents.

It may be the world’s cheapest Automatic Train Protection System once deployed, with a rollout cost of around Rs 30 lakh to 50 lakh per kilometre, almost a fourth of the cost of comparable systems internationally.

The Kavach system will be able to recalibrate based on temporary speed limitations en route in the next phase, something it now lacks.